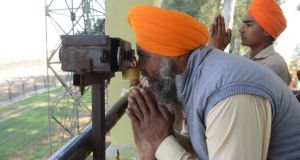 An Indian Sikh devotee offers prayers while looking through binocular towards the Gurdwara Kartarpur Sahib in Pakistan Photograph: Narinder Nanu/AFP/Getty

India has laid the foundation stone in its northern Punjab state for a new “corridor” into Pakistan to provide pilgrims visa-free access to a Sikh temple across the border, in a move aimed at easing tension between the nuclear-armed neighbours.

The projected 6km-long passageway will enable pilgrims to walk from Dera Baba Nanak village to the Kartarpur Sahib Gurdwara temple, east of Lahore, where Sikhism’s founder Guru Nanak Dev Bedi lived the last 18 years of his life until his death in 1539.

Pakistan will similarly lay the foundation for the walkway on its own side on Wednesday and both sides will connect the “holy passageway” by November 2019 to coincide with Nanak’s 350th birth anniversary.

Inaugurating the project on Monday, India’s vice-president, Venkiah Naidu, said that the Kartarpur corridor would act as a link between the people of the two countries and pave the way for peace and prosperity in the region. “This is a corridor that opens new doors and new possibilities” Mr Naidu said.

A day earlier, Indian prime minister Narendra Modi compared the corridors’ creation to the falling of the Berlin Wall in 1989.

“Had anyone thought the Berlin Wall would fall? Maybe with the blessings of Nanak the Kartarpur corridor will not remain just a corridor, but will act as a bridge between the two countries” he said.

The proposal to establish the corridor to the Sikh temple was initiated more than two decades ago, but deteriorating security, political and diplomatic ties between the two sides prevented it from happening.

India accuses Pakistan of fuelling the Muslim insurgency in its northern disputed Kashmir state, which is divided between the two but claimed in its entirety by both.

Islamabad dismisses India’s accusations and claims it provides the Kashmiri insurgency that has claimed more than 70,000 lives since it erupted in 1989 only moral and diplomatic support.

Since independence in 1947, the neighbours have fought three wars and an 11-week long military engagement in Kashmir in 1999 in which 1,200 soldiers died on both sides. It came close to a nuclear exchange.

The ceremony to mark the start of the Kartarpur corridor also coincided with the 10th anniversary of the strike on Mumbai by Pakistan-sponsored gunmen in which 166 people died and more than 300 were injured.

India and Pakistan have only one official land crossing at nearby Wagah; the Kartarpur corridor will become the second one.