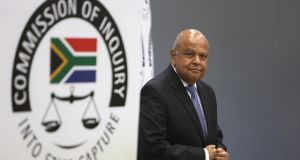 Evidence that former president Jacob Zuma was a key facilitator of attempts to plunder state resources is mounting at an inquiry looking into public sector corruption in South Africa.

This week a cabinet minister and former director general at the National Treasury described how Zuma and his allies tried to manipulate government processes and appointments to the benefit of the Gupta business family and their associates.

Public enterprises minister Pravin Gordhan, who served as finance minister twice under Zuma before being fired in March 2017, outlined how his former boss lied to and manipulated the executive to try to bypass good governance checks and balances.

Giving oral testimony, Gordhan also detailed how Zuma repeatedly overstepped his mandate to get his preferred candidates appointed to top posts at state-run enterprises and government departments that are now embroiled in massive corruption scandals.

The inquiry, led by deputy chief justice Raymond Zondo, has a focus on whether the controversial Gupta family and their associates illegally influenced political decisions taken by Zuma and some officials to their financial benefit.

Zuma and the Gupta brothers – Athol, Ajay and Rajesh – deny any wrongdoing, and say they are the victims of factional battles taking place in the African National Congress (ANC).

The ruling party removed Zuma from the South African presidency this year and replaced him with Cyril Ramaphosa, its new leader, who has vowed to tackle the endemic corruption that is crippling the state’s ability to deliver services.

At the Commission of Inquiry into State Capture, Corruption and Fraud in the Public Sector, Gordhan said Zuma would strongly push back when the National Treasury opposed spending on certain projects that had not followed the correct procedures, or it considered not in the public interest.

In an affidavit he provided to the inquiry, Gordhan maintained Zuma was often interested in “ordinary transactional matters” relating to certain projects that suggested a pattern that could help investigators understand how “state capture” by private interests worked.

In one instance Gordhan recalled Zuma phoning him in 2015 to request that the then finance minister facilitate a South African Airways (SAA) deal that could have cost the struggling airline the equivalent of millions of euro.

Proposed by then SAA chairwoman Dudu Myeni, a close friend of Zuma’s, the deal would have seen the cash-strapped airline buy new aeroplanes from Airbus that it would then sell to a local company. Once that deal was done, it would lease the aircraft back.

“I explained [in the call] that we could not [go through with the deal] . . . but it was clear to me Ms Myeni [had] contacted the former president and that . . . prompted his call to me,” Gordhan recalled.

Zuma also pushed for an unaffordable one-trillion-rand nuclear deal with Russia as well as an agreement to buy oil company Engen from the Malaysian energy giant Petronas for six billion rand (about €380 million) over its market value. Both deals had links to the Guptas.

On Wednesday former National Treasury director general Lungisa Fuzile told the inquiry that after finance minister Nhlanhla Nene was axed by Zuma in December 2015 he received a warning from within the ANC that “he was going to get a Gupta minister who will arrive with his advisers”.

The following day the little-known MP Des van Rooyen was appointed finance minister, and he subsequently arrived at the National Treasury with two unknown advisors who immediately sought to replace the institution’s top tier of management.

Van Rooyen’s tenure lasted just four days due to the public outcry over his appointment. He was replaced by Gordhan, who tried to restore order at the National Treasury in the 15 months before he was fired.

Van Rooyen was subsequently linked to the Guptas through his phone records in an investigation carried out by South Africa’s public sector corruption ombudsman.

Fuzile told the inquiry that during his tenure it became clear that Zuma and the Guptas were connected. “I was starting to get a picture that there was a connection between what the Guptas wanted and [what] the president of the country wanted and was doing,” he said.

Zuma has been asked by Judge Zondo to give his version of events at the inquiry, but so far he has failed to respond to the accusations that are mounting against him.