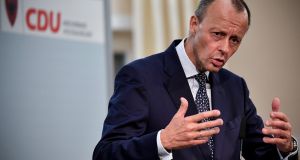 Friedrich Merz: said he was at most ‘upper middle-class’. Photograph: Epa/Ulrich Hufnagel

Who wants to be a millionaire? Friedrich Merz doesn’t.

The 62-year-old who hopes to succeed Angela Merkel as leader of Germany’s centre-right Christian Democratic Union (CDU) was once her deputy and parliamentary party leader. She ousted him in 2002, fearing his rhetorical and analytical skills might pose a threat to her authority.

Now Merz has returned to haunt her, like Banquo’s ghost, as one of three hopefuls for the top CDU job.

A conservative-liberal lawyer, he left politics in recent years for a string of banks and insurance companies – most recently as chairman of BlackRock, a leading wealth fund.

Now those roles and the earnings that came with them are generating more headlines than his proposed policies for the CDU. Merz promises to rebrand the post-Merkel CDU as a centrist, law-and-order party where both liberals and conservatives feel at home.

But he tripped up last week when asked in public if – given his countless boardroom positions – he was a millionaire. No, he said, he was at most “upper middle-class”. Later he conceded a gross annual income of about €1 million annually.

“From my parents I picked up the values . . . of diligence, discipline, decency, respect and the knowledge that, if one can afford it, one gives something back to society,” he said.

As well as a house with his wife and two children on Bavaria’s Tegernsee lake, playground of the rich and famous, Merz owns two private planes.

It’s not just Germany’s tabloids that are having a field day contrasting his “upper middle-class” remark with his seven-figure salary. The broadsheet Die Welt’s in-house wag headlined a recent front page column: “Teary Merz admits: I may be a millionaire.”

Two weeks before CDU delegates choose a new leader from one of three candidates, the Merz-millionaire debate has taken on a life of its own.

By German standards, a family of four is middle class on a monthly salary of up to €5,700. Thus Merz belongs to the upper-upper class. And because this is Germany, he has a problem.

For sociologists and wealth researchers, the Merz episode says far more about German attitudes to wealth than it does about the CDU’s millionaire leader-hopeful.

From Churchill to Trump, independently wealthy political leaders are nothing special in most western countries. But post-war West Germany followed a very different path.

And many looked askance at pre-war millionaires – in particular industrialists such as the Krupp family – who were tainted by their Third Reich connections.

“The really rich . . . aren’t really trusted here, which is of course absurd, but it still belongs to our psychological DNA,” said Prof Thomas Druyen, wealth researcher at Vienna’s Sigmund-Freud University, on German radio.

CDU opponents, from left to far-right, have suggested someone on a Merz-style income is too far away from the realities of most Germans, in particular welfare recipients, to be an effective political leader. But his party allies – and even CDU leadership rivals – are puzzled and frustrated by all the focus on Merz’s salary and Germans’ readiness to, as one put it, “swing the envy cudgel”.

Even Jens Spahn, another CDU leadership hopeful, dismissed the debate as silly. “There is no wealth limit in the constitution for chancellor hopefuls,” he said.

Struggling in third place in the leadership race, behind Annegret Kramp-Karrenbauer and Merz, Spahn launched an attention-getting volley last weekend by demanding that next month’s party conference debate migration.

In particular, he said, delegates should decide whether Germany should back a non-binding UN refugee agreement to be adopted next month.

The US, Australia, Austria, Israel and others have said they will not join the UN migration compact, in the works since 2016 in the wake of the Mediterranean migration crisis.

Any attempt to abandon the postwar multilateral order was not patriotism, Merkel said, but nationalism

On Wednesday night Merz, who has already purloined many of Spahn’s conservative clothes in the leadership race, lifted his migration push too, and ran with it.

Germany needs to lead Europe on globalisation and protection, Merz said in the eastern state of Thuringia, rather than reacting, Merkel-style, to events.

In particular it needs a fundamental debate about immigration and asylum, he said, after a failure to do so at the height of the 2015-2016 refugee crisis.

On Thursday he rowed back on his remarks, after they attracted widespread criticism – and cheers from the far-right Alternative für Deutschland.

Merkel, meanwhile, has made an impassioned plea for the compact as an example of a multilateral approach to complex question such as migration. Any attempt to abandon the postwar multilateral order – on migration or any other issue – was not patriotism, she said, but nationalism.

If CDU delegates refuse to back the UN migration compact in two weeks’ time at their Hamburg gathering, Merkel knows her credibility as chancellor will be severely damaged.

And one man waiting to inherit the spoils – the CDU leadership and possibly the keys to chancellery – is Friedrich Merz, the man she shafted in 2002.