Amid calls to press for peace in Yemen, the pontiff met with 600 religious figures in UAE 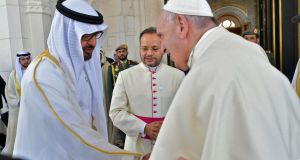 The three-day visit of Pope Francis to the Arabian peninsula, the first ever by a pope, has been heralded by his Emirati Muslim hosts as a major breakthrough in his mission to promote Christian dialogue with Islam.

The pope was greeted on arrival on Sunday by Abu Dhabi’s crown prince, Mohammed bin Zayed, who has proclaimed 2019 a “Year of Tolerance”, with the stated aim of countering brutal intolerance practised by all faiths.

The pope has been urged by advocacy groups including Human Rights Watch to call for peace in Yemen in private talks with Saudi Arabia’s Crown Prince Mohammed Bin Salman.

Saudi Arabia and the UAE have been heavily criticised for their airstrikes in Yemen. Some 60,000 civilians have been killed in fighting there, 85,000 children have died from starvation and disease, and half the population of 28 million faces famine.

The pope has also been pressed to raise the UAE’s harsh treatment of dissidents.

The pope also met with Sheikh Ahmed al-Tayeb, Grand Imam of Egypt’s Al-Azhar mosque and one of the world’s leading Sunni scholars. The pair jointly declared that “religions must never incite wars, hateful attitudes, hostility and extremism, nor must they incite violence or the shedding of blood”.

Dr Anthony O’Mahony, Oxford-based expert on the Arabian peninsula and region said the pair’s meeting echoed a three-week dialogue in 1219 between St Francis of Asisi – for whom the pope is named – and Egyptian sultan and scholar Malik al-Kamil.

While those conversations took place during the violence of the Fifth Crusade,the two men realised their faiths could reconcile and coexist in peace.

Dr O’Mahony observed that the pope’s meeting with Sheikh Tayeb in Saudi Arabia, the birthplace of Islam, “is not just about the UAE, it has global resonance. It is not just important for Christians in the Middle East but is a historical marker for encounters between these two religious traditions”.

Unlike Saudi Arabia, which bans public Christian worship, the UAE – where Islam is the state religion – hosts 40 churches which serve more than one million Christians.

In Dubai there is a Hindu temple, Sikh gurdwara and Buddhist temple. In Abu Dhabi, a new Hindu temple is under construction, and Christmas and the Hindu festival Diwali are widely celebrated in the UAE.

Christian missionary work among Muslims is prohibited in the UAE, although Christian schools and hospitals operate there. The first hospital was opened by US medical missionaries in 1960 under the auspices of Abu Dhabi ruler Sheikh bin Sultan Al Nahyan, founder of the UAE.

On Tuesday, more than 135,000 Catholics are expected to attend a papal mass at the Zayed Sports City before the pope returns to Rome.