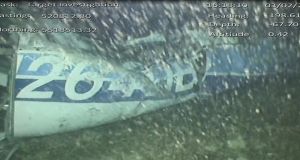 Still from handout video issued by the Air Accidents Investigation Branch showing the rear left side of the fuselage. Photograph: AAIB/PA Wire

A body is visible in seabed video footage of the wreckage of the plane which crashed in the English Channel with Cardiff City footballer Emiliano Sala on board.

The UK Air Accidents Investigation Branch said the footage was filmed using an underwater remotely operated vehicle (ROV) which was surveying the area after the plane was located on Sunday.

Analysis of the footage by AAIB investigators confirmed the wreckage was of the missing Piper Malibu aircraft, which disappeared in poor weather near Guernsey on January 21st.

The AAIB said in a statement: “The ROV carried out a further search of the area overnight, but did not identify any additional pieces of wreckage.

“Tragically, in video footage from the ROV, one occupant is visible amidst the wreckage.”

The image shows the rear left side of the fuselage, including part of the aircraft registration, N264DB.

A decision has yet to be taken on whether to raise the wreckage to the surface.

The statement added: “The AAIB is now considering the next steps, in consultation with the families of the pilot and passenger, and the police.”

Emiliano Sala’s father has spoken of his anguish and disbelief after the wreckage was discovered.

Speaking at his home in Argentina, Horacio Sala said he was “desperate” after a privately-funded search operation found the aircraft in waters north of Guernsey on Sunday.

“I cannot believe it. This is a dream. A bad dream. I am desperate,” Mr Sala told local broadcaster Cronica TV.

The Piper Malibu carrying 28-year-old Sala and pilot David Ibbotson, 59, disappeared over the English Channel after leaving Nantes in France for Cardiff.

Two vessels, including one commissioned by the AAIB, using sonar had been taking part in a fresh search covering an area of around four square nautical miles on Sunday when the wreckage was located.

Marine scientist David Mearns, the director of Blue Water Recoveries, led a team on the search vessel FPV Morven while the AAIB also sent a team aboard the Geo Ocean III, a specialist vessel commissioned for the task.

The privately-funded operation on behalf of the Sala family was made possible after a campaign raised more than £260,000 (€296,700) to pay for it.

The plane had requested to descend before it lost contact with Jersey air traffic control.

An official search operation was called off on January 24th after Guernsey’s harbour master Captain David Barker said the chances of survival following such a long period were “extremely remote”.

Two seat cushions, which are likely to have come from the plane, were found last week on the French coast.

Cardiff had signed the footballer for a club record £15 million (€17,12m) and he was due to start training last month. – PA