Special relationship with Venezuela a headache for Spain

Venezuelan president Nicolas Maduro rejected the ultimatum he had been given by several EU countries and ruled out a new poll, while opposition leader Juan Guaido declared himself self-proclaimed acting head of state. Video: Reuters 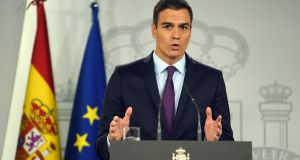 Spain was one of a number of EU countries to recognise Guaidó on Monday as Venezuela’s interim president.

According to official figures there are around 100,000 Venezuelans in Spain, although many estimates put the true figure much higher. For the last three years, Venezuelans have headed the list of asylum requests to Spain. Many of those who come are children or grandchildren of Spaniards who escaped poverty in the mid-20th century by emigrating to Venezuela.

Meanwhile, there is a large community of Spaniards in Venezuela and many Spanish companies operate there.

Such closeness has led to tensions. The Venezuelan government has frequently accused former Spanish prime minister José María Aznar of involvement in the botched 2002 coup that briefly removed Hugo Chávez from power. Aznar denies the claims, but when Chávez repeatedly referred to him as “fascist” during a 2007 summit, Spain’s King Juan Carlos famously rounded on the Venezuelan president, saying: “Why don’t you shut up?”

This kind of baggage continues to colour Spain’s political debate on Venezuela. Parties of the right, such as Ciudadanos and the Popular Party (PP), take an uncompromising stance against the Maduro administration. Last month, PP leader Pablo Casado drew cheers as he addressed a Venezuelan demonstration in central Madrid.

Such is the prominence of the issue in Spain that the right has increasingly used it as a front on which to attack the Socialist government of Sánchez, claiming his careful alignment with other EU countries on the issue was equivocation. Some see this as part of a strategy to remove Sánchez’s fragile administration from power.

“It’s a shame that Spain has disappeared from the international stage,” said Casado recently, having called on the prime minister to follow Donald Trump’s lead by acknowledging Guaidó’s legitimacy the moment he emerged. Casado has said Spain should seize bank accounts and properties belonging to members of the Maduro administration, many of who are known to have substantial assets in the country.

Sánchez’s situation is further complicated by the fact his government is supported by Podemos, a stridently leftist party with ideological and, in some cases personal, links to chavismo.

Podemos leader Pablo Iglesias has distanced himself from the Maduro regime in recent weeks. However, he did retweet a comment by British Labour Party leader, Jeremy Corbyn, which read: “We oppose outside interference in Venezuela, whether from the US or anywhere else.”

Meanwhile, Sánchez, a social democrat, has been emphasising the distance between himself and the leftists who have governed Venezuela for the last 20 years. During a tour of Latin America last week, he said that “the left has nothing to do with Maduro”, drawing a fierce response from the Venezuelan. But the Spanish prime minister has also berated his right-wing opposition for refusing to close ranks on this international issue.

On Saturday, highlighting the common policy on Venezuela he had agreed with Germany’s Angela Merkel, a conservative, and France’s Emmanuel Macron, a centrist, Sánchez bemoaned what he saw as a lack of statesmanship.