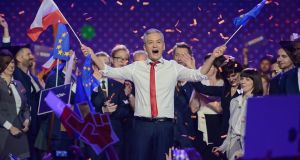 Former mayor of Slupsk Robert Biedron: was one of Poland’s most trusted leaders long before he unveiled a political party called Wiosna. Photograph: Jakub Kaminski

Poland’s embattled left is hoping Robert Biedron can bring them an early spring in next autumn’s general elections.

As a crowd of 6,000 cheered him, and Ode to Joy, the EU anthem, the 42-year-old regional mayor launched a new pro-EU party, Wiosna (meaning spring), that he hopes will end Poland’s political civil war.

“Instead of talks we got unending conflict instead of common good, party interests instead of empathy – growing enmity,” he said, three weeks after Gdansk’s liberal mayor Pawel Adamowicz was stabbed and killed. “We are the spring, we’re bringing fresh air to Polish politics.”

Mr Biedron has been a rising figure for more than a decade as the founder of Poland’s Campaign Against Homophobia, particularly after he was beaten up in a gay attack in a park.

But its main pitch is to voters disgusted by far-reaching reforms of the national conservative ruling Law and Justice (PiS) party – but who feel ignored and excluded by the liberal politics of its rival, the Civic Platform (PO).

Mr Biedron is promising an alternative to PO “politics of statistics and economic indicators” and PiS “caricature of democracy, with constitutional breaches, limitations on women’s rights”.

“Neither side solved our problems,” he said. “They’ve all let us down.”

But Poland’s post-communist political landscape is littered with the bones of new parties, particularly on the fragmented left.

The country’s Democratic Left Alliance won just 7 per cent in recent local elections and political observers are cautious about whether his pitch will translate into real support in this conservative country.

“If he’s skilful he can get some 10 per cent-plus of a liberal big-city electorate,” said political analyst Eugeniusz Smolar. Mr Biedron’s support, he suggests, may come more at the expense of the liberal-conservative PO than PiS, the ruling national conservative party.

And Poland’s D’Hont electoral system could see additional seats – and another term in office – for PiS after it won an absolute majority in 2015 with 37.6 per cent of the vote.

Mr Biedron has received national attention for cutting city debt and pushing environmentally friendly policies. And he knows how to capitalise on his main selling point: fatigue with established national figures that made him one of Poland’s most trusted leaders long before he unveiled his party.

As political rivals eye up their new arrival, most are now predicting an even livelier “clash of civilisations” election when Poles go to the polls later this year.