With creativity and goodwill, Britain and the European Union can still perhaps resolve the issue of Irish border arrangements after Brexit, German Chancellor Angela Merkel said on Monday (February 4). 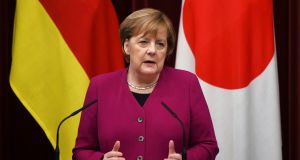 German Chancellor Angela Merkel said: “There are definitely options for preserving the integrity of the single market even when Northern Ireland isn’t part of it because it is part of Britain while at the same time meeting the desire to have, if possible, no border controls”. Photograph: Toshifumi Kitamura/Pool Photo via AP

German chancellor Angela Merkel has suggested a “creative” approach to Brexit talks could see outstanding backstop questions resolved in an agreement on a future EU-UK relationship.

On a trip to Japan, Angela Merkel said there were “possibilities, no doubt” to maintain the integrity of the single market , a key EU demand , and avoiding checks on the Border.

“There are no doubt possibilities to ensure, on the one hand, the integrity of the single market ... even when Northern Ireland’s doesn’t belong to it because it belongs to the UK, and the wish, if possible, to allow for no controls on the border between Northern Ireland and Ireland and to solve this point.”

She said if the EU and UK listened to each other, and were “creative”, she had no doubt a No-Deal Brexit could be avoided. Talks to this effect “could and must” be held soon and re-opening the withdrawal treaty was “not on the order of business”. Instead it was now up to London to say what it wanted.

“The chancellor spoke of creativity in finding a solution, and meant it,” said Mr Steffen Seibert, to The Irish Times. “The withdrawal agreement remains as it is however. But in talking about the future relationship we have to address the border question creatively.”

The federal government in Berlin has consistently said it supports Dublin on Brexit, although there have been mixed signals of late. While Dr Merkel insists the Brexit deal is final and cannot be opened, her foreign minister Heiko Maas said last month that “the question of whether the deal should be re-opened ... needs to be discussed now”.

Last month Dr Merkel said she would work “to the last day” to find a “responsible” Brexit treaty-based solution “so that in 50 years, people won’t shake their heads and say ‘why weren’t they able to find a compromise?’”

“She herself said the scope for the way forward is in the political declaration, not the withdrawal agreement.”

Another source said it was a “hint” from Dr Merkel to the British “to focus on the future”.

British prime minister Theresa May is expected to present further proposals on Brexit at a speech today in Northern Ireland.

Meanwhile, former Ulster Unionist Party leader David Trimble has indicated he plans to take the British government to court to ensure the backstop is removed from the withdrawal agreement.

“The Nobel Peace Prize winner and architect of the Good Friday Agreement plans to initiate judicial review proceedings to ensure that the Protocol is removed from the Withdrawal Agreement,” a spokesman said.

Lord Trimble said that alternative arrangements should be put in place instead as he claims the protocol in Mrs May’s deal breaches the terms of the Belfast Agreement.

Lord Trimble and John Hume, former leader of the Social Democratic and Labour Party, jointly received the Nobel Peace Prize in 1998 for their roles in bringing about the Belfast Agreement.

In Brussels, Minister for Foreign Affairs Simon Coveney said Ireland and the EU are prepared, and want to, provide backstop “reassurances and clarity to the UK to assist the Brexit ratification process on the UK side”. But he insisted that alternatives to the backstop had been exhaustively examined and tested.

“From our perspective on some of the core issues particularly around the Irish protocol and the backstop,” Mr Coveney told journalists, “it [the withdrawal agreement] is already a series of compromises that is actually designed around British red lines. This is a UK plan as well as an Irish and EU one to solve a very important issue.”

Mr Coveney was in Brussels for a meeting between EU foreign ministers and their Arab League counterparts.

“We spent well over a year looking at different ways of providing the guarantee of no physical infrastructure on the island of Ireland to protect the all-Ireland economy which reinforces the peace process. Many, many, many hours were involved in coming up with a legally credible and pragmatic solution to that problem.

“And in that process we looked at lots of different alternative arrangements and ideas and I have yet to hear any new thinking that goes beyond what has already been tested. And this is the issue here. What Ireland is being asked to do by some in Westminster is to essentially do away with an agreed solution between the UK and EU negotiators and to replace it with wishful thinking.”

Mrs May is to visit Belfast on Tuesday to deliver a Brexit speech and meet businesspeople.

She is due to meet DUP leader Arlene Foster on Wednesday.

“We want an orderly exit from the European Union which works for London, Dublin, Belfast and Brussels. It is possible but requires political will. This is not a time for intransigence,” Ms Foster said in a statement ahead of Mrs May’s visit.

Mrs May is due to reiterate the British government’s commitment to avoiding a hard border in Ireland. She is also expected to explain why she is now seeking an alternative to the backstop .

Mrs May originally urged political and business leaders in Northern Ireland to support her Brexit deal but after it was defeated in the House of Commons by 432 votes to 202 she then moved to try to find an alternative to the backstop.

The British Labour Party’s Brexit spokesman Sir Keir Starmer who met business people, trade unions and the SDLP and Sinn Féin in Belfast on Monday, said he had detected “great anxiety” in Northern Ireland after Mrs May “voted against the backstop that she negotiated”.

“That has raised levels of anxiety about a no deal outcome,” he told The Irish Times on Monday.

And while Labour leader Jeremy Corbyn has opposed the backstop, Sir Keir said it appeared that some form of backstop was now inevitable. He said: “We have got concerns with the backstop but we accept that a backstop is inevitable given that the prime minister has now run down the article 50 clock and nobody credibly thinks that a new treaty arrangement with the EU is going to be agreed by January 1st, 2021.

“So we have concerns about the backstop but we now recognise that a backstop is now inevitable.” – Additional reporting: Reuters