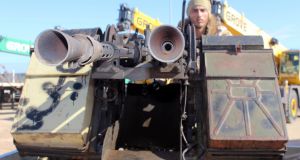 A member of the Libyan internationally recognised government forces heads out to the front line atop a military vehicle from Misrata on February 3rd, 2020. Photograph: Ayman Al-Sahili/Reuters

Security and defence were the main themes of Tuesday’s European Commission meeting, expressing its determination to rebrand the European Union as a “geopolitical” force with a presence on the world stage and power projection commensurate with its economic weight.

As defence remains a national competence, Brussels has to confine its role to enhancing intergovernmental co-operation in areas like investment in research and innovation, standardisation of weaponry and procurement, and promoting mobility of forces across the union.

The research budget in the European Defence Fund is being boosted and structured co-operation on a range of common projects through the Pesco programmes is progressing.

Ireland has joined up willingly in the latter, insisting that such co-operation does not infringe on traditional neutrality.

All well and good. But a real measure of the difficulties involved in projecting the EU as a military power can be seen across the road from the commission in the attempts by the union’s diplomatic and security wing, the European External Action Service, to follow up on recent promises to enforce a UN arms embargo on Libya by reviving its naval rescue operation Sophia.

Foreign ministers meet on Monday to discuss a redefinition of the operation’s mandate but a deadlock among ambassadors in the Political and Security Committee (PSC), largely caused by Austria, makes the required unanimity unlikely at this stage.

Chancellor Sebastian Kurz has rejected EU high representative for foreign policy Josep Borrell’s idea of reviving Sophia for monitoring the embargo on grounds that any deployment of EU naval vessels in the area would become a “pull factor” encouraging migrants to try to cross the Mediterranean. It would be interpreted, he argues, as “a ticket to Europe”. The EU would inevitably become engaged in more rescue operations.

Indeed, it is true that EU vessels in a new Sophia mission, although to be tasked primarily with policing the embargo, would be obliged by the laws of the sea to continue to pick up at-threat migrants if they came across them.

Since becoming involved in 2015 in the old Sophia mission, Irish Naval Service personnel rescued more than 18,000 people, but the mission had to be substantially closed down last year because as-yet unresolved complaints, notably on Italy’s part, arose over where such migrants would be landed after rescue.

Some 700,000 African migrants are currently in Libya, and although most are not expected to cross to Europe, there are fears that the flow could start up again.

Italy’s foreign minister Luigi Di Maio said on Monday that Sophia could be used only if it is “dismantled and reassembled in a completely different way’’.  The new proposed mandate also incorporates air and satellite monitoring of land routes for weapons.

Borrell insists that the deployment of EU naval vessels in the eastern Mediterranean, where the arms supplies are being transported, will not impinge on the traditional, now much reduced, people-smuggling routes from Libya and hence should not involve the ships in a rescue role.

Austria remains unconvinced. Kurz, who has sought domestically to capture political ground opposing migrants and migration occupied by the far-right opposition Freedom Party, has even clashed publicly on the issue with his coalition Green partners. They say they are quite happy to support rescue operations.

A German compromise proposed at the PSC, to leave the naval operation until a later phase of the mission, has not managed to appease Vienna.

At the Berlin Libya summit last month foreign powers like Turkey, Russia, France and Egypt agreed to stop interfering in the conflict, and attempts to promote dialogue between the country’s warring factions were to be supported by a robust enforcement of the embargo. But easier said than done, it appears.

The UN-recognised Government of National Accord under prime minister Fayez al-Sarraj holds the capital Tripoli, but since last April it has been under sustained attack by rebel general Khalifa Haftar’s Libyan National Army, which is supported by a rival administration based in the eastern city of Tobruk.

Since the Berlin meeting UNSMIL, the UN mission in Libya, has already reported violations of the embargo, in the form of new weaponry entering the country.

Cutting the flow, however, may yet prove overambitious for the EU.