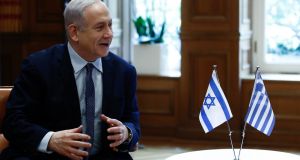 Binyamin Netanyahu is living on borrowed time. Facing a corruption trial on allegations of bribery, fraud and breach of trust, he has informed the speaker of the Knesset, Israel’s parliament, that he will seek parliamentary immunity which would prevent the start of the trial as long he remains prime minister.

However, such a scenario is unlikely.

Shortly after Netanyahu completed his televised address on Wednesday night declaring his intention to request immunity, Avigdor Lieberman, the head of Yisrael Beiteinu, made clear that his party would vote against the immunity request.

“Now it is clear without a doubt. All that interested and interests Netanyahu is immunity,” Lieberman said. “Israel has become hostage to Netanyahu’s personal problem. He doesn’t care about left or right, religious or secular. The only thing that concerns him is a coalition for immunity.”

Netanyahu is alleged to have accepted gifts from wealthy businessmen and dispensed favours to try to get more positive press coverage. He denies any wrongdoing, claiming he is the victim of a left-wing and media witch hunt.

Israel is in the midst of its most serious constitutional and political crisis in its 71-year history, without a functioning government for a year after two inconclusive elections in 2019 and facing a third election in two months’ time.

The country is split between Netanyahu’s right-religious bloc and the centre-left Arab parties. Yisrael Beiteinu, although right wing, is not considered part of Netanyahu’s natural coalition and continues to hold the balance of power. Without its support, Netanyahu has no majority for immunity.

Under normal circumstances an immunity request needs to be approved by the Knesset House committee, but such a committee does not exist because a government wasn’t formed after the September election.

Knesset speaker Yuli Edelstein, from Netanyahu’s ruling Likud party, aware that there is no majority for immunity, has already indicated that he will block opposition attempts to form a House committee in the coming weeks to vote on the immunity request.

So Netanyahu has gained a few months’ grace and hopes that the March 2nd election will result in a Knesset majority for his bloc, which will then approve immunity.

However, the polls show continuing deadlock and Israelis are already considering, with dread, the prospect of a fourth election.

Some commentators believe that such a scenario may not be so bad for Israel’s longest-serving prime minister. As long as the deadlock continues, as of Wednesday, when the immunity request was presented, his trial is on hold. Israel’s trial of the century cannot begin until the question of immunity is settled.

The March election will be dominated by one question: should Netanyahu be granted immunity and remain in office, or step down and stand trial?

“Today, it is clear what we’re fighting for. Netanyahu knows he’s guilty,” said Benny Gantz, leader of the centrist Blue and White party. “So, either there will be an extremist immunity government or a unified national one.”