In major victory for prime minister, opposition leader will serve as PM in 18 months’ time 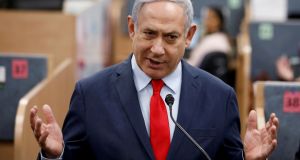 Binyamin Netanyahu’s coalition is likely to constitute 78 or 79 of the 120 Knesset members. Photograph: Amir Cohen/Reuters

On a dramatic day in Israeli politics, the country’s opposition leader Benny Gantz agreed to join an emergency coalition headed initially by Binyamin Netanyahu, in a major victory for the previously embattled prime minister.

Mr Gantz’s dramatic U-turn led to the break-up of his centrist Blue and White party. Its main campaign promise ahead of this month’s indecisive election – the third in a year – was that the party would not sit in a government headed by Mr Netanyahu, who has been indicted on serious corruption charges and whose trial has now been delayed until May.

But the coronavirus crisis changed everything and public pressure mounted for an emergency unity coalition to deal with the crisis. Neither Mr Netanyahu nor Mr Gantz had a realistic chance of forming a minority government and the prospect of a fourth election in the middle of an unprecedented health and economic crisis was unconscionable.

Blue and White was a loose alliance of different factions with one main aim: ending the rule of Israel’s longest-serving prime minister. Two of the party’s top four leaders – dubbed the cockpit – responded to the emerging coalition deal by splitting from Blue and White.

“Gantz decided to crawl into Netanyahu’s government without a fight, betraying our voters,” said former finance minister Yair Lapid, pulling his Yesh Atid faction out of party, saying that Mr Gantz did not succeed in deposing Mr Netanyahu nor in keeping the party together.

The fourth Blue and White leader, former top general Gabi Ashkenazi, stuck with Mr Gantz and will serve as defence minister in the unity government.

The split occurred after Mr Gantz was elected interim speaker of the Knesset parliament, giving time for the completion of the coalition talks, and effectively blocking any move by the majority bloc of anti-Netanyahu parliamentarians to pass a Bill that would prevent a candidate who has been indicted on criminal charges from serving as prime minister.

“These are not ordinary days and require extraordinary decisions,” Mr Gantz said after being elected speaker, citing the coronavirus crisis. “But don’t be mistaken – I would never compromise on the principles for which more than one million citizens voted. Netanyahu knows this well.”

He vowed to defend democracy and the judiciary, after the previous speaker, from Mr Netanyahu’s Likud party, ignored a high court ruling to hold a vote for a new speaker.

Mr Netanyahu’s coalition is likely to constitute 78 or 79 of the 120 Knesset members – all the right-wing and religious parties plus Mr Gantz’s Israel Resilience faction and the left-wing Labour party.