Elizabeth Canavan, Assistant Sec. General, Department of the Taoiseach has announced that 170 Irish citizens are en route to Ireland from Perth. The government are trying to help over 2,000 Irish citizens get home from abroad. Video: RTE News Now 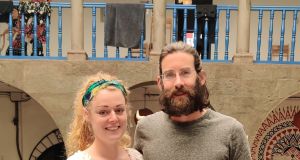 Marie Barry and Andrew Cotter, both from Cork, arrived in Peru from Bolivia two days before the national lockdown was announced.

The imposition of up to three months of quarantine on a hostel in Cusco after a Covid-19 cluster was detected there has left Irish tourists stranded in the Peruvian city increasingly nervous as they wait for a Government evacuation to get underway.

Peruvian health officials on Wednesday ordered what they described as “absolute quarantine” for between one and three months of the Pariwana hostel after two guests, one from the Netherlands and another from Finland, tested positive for coronavirus.

Among the estimated 120 guests now subjected to the lockdown is Belfast tourist Rhys McKendry. “When the announcement first came out a lot of people actually started crying. To be told two people had tested positive was a pretty big blow,” he said.

Tests on the two guests were ordered after they showed symptoms of having the virus. A previous guest is believed to have started showing symptoms after returning home. Peru ordered a national lockdown on March 16th and has all but sealed its air, land and sea borders, stranding thousands of foreign tourists.

The news of the strict quarantine at the Pariwana quickly spread on WhatsApp among other Irish tourists stuck in Cusco. Many wondered if they should leave their own hostels for Airbnb accommodation to avoid being caught up in a similar Covid-19 outbreak. They said they were afraid this could lead to them missing an evacuation flight being organised by the Government.

“Now we’re very worried because everyone else is in a hostel and we are wondering if we should try and get out because if it does happen we’re stuck. Where do we go? Is it too late to change our accommodation with the DFA [Department of Foreign Affairs]? We don’t want to risk missing the flight. It is very concerning,” says Andrew Cotter. He and his partner Marie Barry, both from Cork, are staying in another hostel in the city having arrived in Peru from Bolivia two days before the national lockdown was announced.

Around 135 Irish tourists, most of them backpackers, have registered for repatriation from Peru. Tánaiste Simon Coveney told RTÉ on Sunday an agreement has been reached between British Airways and Aer Lingus to charter a flight from Lima “in the next few days”.

In a statement on Wednesday the Department of Foreign Affairs said while an agreement was in place for a flight to go, “internal travel remains heavily restricted and many of our citizens are located hundreds of miles away from the international airport. We are working 24 hours to get the necessary transport and permissions in place to move them.”

News that flights left Lima for the UK, Spain and Switzerland caused frustration about the delay in starting the repatriation among some of those stuck in Cusco. “It can be done. It is being done. But from our perspective it seems to be very slow and that is worrying us,” says Mr Cotter.

In the Pariwana hostel, Mr McKendry says he has not given up hope of being able to get on the repatriation flight. He is yet to be tested for Covid-19. “I believe being tested might be my only option of getting out, so I am going to ask the doctors if it is possible,” he says.

Since the quarantine was announced the Pariwana’s guests are being confined to their dorms for 23 hours with management warning of the possibility “we have more infections among us”. The hostel’s TV and computer rooms are now sealed off. The two tourists who tested positive are isolated in separate dorms from other guests.

The Peruvian authorities said any guests who failed to obey strict social distancing measures could face between five to 10 years in jail. Each guest has been issued with a mask and assigned their own plate and cutlery. “The staff are staying with us in the hostel which shows how committed they are and we’re getting three meals a day. At lunch we were just two to a table that the day before sat eight,” says Mr McKendry.

Late on Wednesday night Irish time, the Irish Embassy in Chile tweeted: “We are aware of the 2 cases of coronavirus confirmed in a hostel in Cusco in Peru. Neither of the people with positive tests are Irish citizens. Our Ambassador spoke today with the one Irish citizen staying at the same hostel and they will remain in contact over the coming days.”

1 Donald Trump is in trouble, and that could spell very bad news
2 House parties are being held ‘with abandon’, Holohan warns
3 O’Doherty and Waters ordered to pay legal costs of case against State over Covid-19 laws
4 Harris rules out early opening of hotels amid easing of lockdown
5 Two teenage girls charged with murder of Cian English on Gold Coast
Real news has value SUBSCRIBE