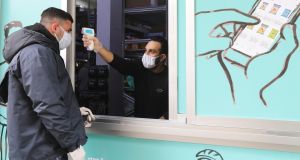 A scooter driver gets his temperature taken before going out with an order, amid the coronavirus outbreak, in Beirut, Lebanon. Photograph: Reuters/Mohamed Azakir

Lebanon is doubly at risk from the coronavirus. On the occasion of the Feast of the Annunciation on Wednesday, President Michel Aoun called on Lebanese to unite, to stay safe at home and pray for deliverance from the pandemic.

The country has had more than 330 cases and six deaths but lacks funds and medical supplies to deal with a larger outbreak. Before the virus appeared, Lebanon was financially and politically bankrupt and healthcare was in crisis.

Lebanese returning from Iran and Italy brought the virus home. By the time Beirut’s international airport closed, it had spread.

A former regional banking hub, Lebanon has, for the first time, defaulted on a eurobond loan and is seeking to reschedule an unpaid $1.2 billion (€1.1 billion). Prime minister Hassan Diab heads a cabinet of academics who are experts in their fields but the ruling political elite, infamous for mismanagement and corruption, continues to call the shots.

Lebanese who took to the streets from October until the virus erupted continue to demand removal of the politicians and the sectarian political system that has brought Beirut, once the “Paris of the M iddle East”, to its knees.

“The Lebanese government has taken swift and broad measures that bought it time, but its ability to manage the outbreak will depend on how it uses this time to secure necessary supplies and provide healthcare workers with the resources they need,” says Human Rights Watch deputy regional director Joe Stork.

Imports of medical supplies have been cut to 10 per cent of normal needs since September due to a shortage of dollars. Hospitals are starved for funds and essential supplies. Medical staff lack protection and are over-worked.

Everything has closed but markets, bakeries, pharmacies and hospitals. Army foot and helicopter patrols enforce a lockdown on a notoriously undisciplined population. The traditional souq in the northern city of Tripoli has been shut. Joggers on Beirut’s seaside corniche have been ordered home.

ATMs dispense weekly $50-$300 worth of Lebanese liras, depending on the size of depositors’ bank accounts. Dollars are not available. Banks continue to value the lira at 1,507 to the dollar while on the black market the dollar costs 2,500-2,700 liras. Inflation is running at 40 per cent.

One-third of Lebanese live in poverty. The government plans to provide poor families with food, hygiene products and financial aid worth $333 per family. The militant political group Hizbullah has announced a $2.3 billion plan in co-ordination with municipalities to provide emergency healthcare in all regions of the country.

Charities are scrambling to succour the needy. Stretched by the steep needs of its citizens, Lebanon struggles to avoid contagion among Syrian and Palestinian refugee residents.

Ex-minister Mohamed Mashnouk told The Irish Times, “We speak only of corona, corona, not financial and political matters. We wake up and ask, ‘What the hell are we going to do today?’ We’re learning new things. We have stopped kissing on cheeks and shaking hands when we meet.

“We put our hands over our hearts in the Arab way. We don’t waste food. We used to throw away half a lettuce, now we eat it all and enjoy it.”