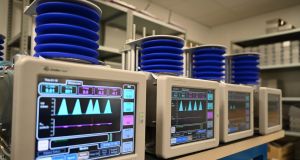 Britain could take part in a European Union procurement scheme for ventilators in future after missing an email from Brussels inviting it to participate in four such schemes since the coronavirus pandemic began. The National Health Service (NHS) has said it needs thousands more ventilators to treat patients with coronavirus, which has now claimed 578 lives in Britain.

“Owing to an initial communication problem, the UK did not receive an invitation in time to join in four joint procurements in response to the coronavirus pandemic. As the commission has confirmed, we are eligible to participate in joint procurements during the transition period, following our departure from the EU earlier this year,” a British government spokesman said.  “As those four initial procurement schemes had already gone out to tender we were unable to take part in these, but we will consider participating in future procurement schemes on the basis of public health requirements at the time.”

Earlier this month, Boris Johnson asked British manufacturers, including car makers, to help the NHS by producing ventilators and paymaster general Penny Mordaunt said this week that Britain had chosen “other routes” rather than the EU procurement scheme.

Labour’s shadow health secretary Jonathan Ashworth said the government now needed to explain how they were going to get crucial supplies for the NHS.

“Given the huge need for PPE, testing capacity and crucial medical equipment including ventilators, people will want to know why on Monday ministers were saying they had ‘chosen other routes’ over joint EU procurement initiatives but now they are claiming that they missed the relevant emails,” he said.

The chancellor of the exchequer, Rishi Sunak, on Thursday promised to pay most self-employed people 80 per cent of their average monthly profits up to £2,500 a month while the crisis continues. But the money will not become available until June and Mr Sunak warned that the self-employed might in future have to pay social insurance at the same level as those in employment.

“I must be honest and point out that in devising this scheme in response to many calls for support, it is now much harder to justify the inconsistent contributions between people of different employment statuses,” he said.