EU urges Kosovo to focus on Covid-19 amid political crisis

Power struggle and US pressure bring down two-month-old government 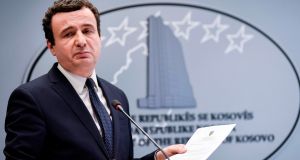 Albin Kurti: deputies voted late on Wednesday to remove the cabinet of the leftist prime minister after less than two months in office. Photograph: Armend Nmani/AFP/Getty

The European Union has urged Kosovo to focus on fighting coronavirus after a power struggle between its leaders, a row over how to combat Covid-19 and pressure from the United States combined to topple its reformist government.

Deputies voted late on Wednesday to remove the cabinet of leftist premier Albin Kurti after less than two months in office, despite public outrage that politicians were squabbling as the pandemic bore down on Kosovo, which has confirmed 71 cases of Covid-19 and one death from the virus.

European Commission spokeswoman Ana Pisonero said the no-confidence vote “puts Kosovo in a difficult political situation at a time of an unprecedented crisis caused by coronavirus”.

“What Kosovo needs is stability and to direct all efforts to tackle the coronavirus crisis and protect the health of people . . . All political leaders have now to act responsibly and in the interest of the people of Kosovo.”

Mr Kurti said he had been ousted by an old guard that feared his anti-graft agenda and which includes Koso’s president Hashim Thaci, with whom he clashed over handling of the Covid-19 crisis and over which of them should lead talks to establish normal relations with Serbia.

In parliament, Mr Kurti accused Mr Thaci of secretly planning to clinch such a deal by exchanging territory with neighbouring Serbia, which refuses to recognise Kosovo’s independence. Critics warn that any land swap could spark fresh conflict in the Balkans.

Mr Thaci, who fought for Kosovo’s ethnic Albanian militia in a 1998-9 war with Serbian forces, denies the claim, but he has joined the US in demanding that Mr Kurti immediately scrap a 100 per cent tax on Serbian imports to Kosovo to help unblock negotiations between Pristina and Belgrade.

The US recently halted $50 million in aid to Kosovo over the tariff row and Richard Grenell, White House envoy to the Serbia-Kosovo talks, has found common ground with Mr Thaci while lambasting Mr Kurti, amid what appears to be a push by US president Donald Trump to broker a historic pact in the Balkans as he seeks re-election.

As France and Germany urged Kosovo’s deputies on Tuesday night to reconsider the no-confidence vote, US ambassador to Pristina Philip Kosnett said he was “pleased” that it would take place.

It was not clear when a new cabinet would be appointed or when the coronavirus outbreak would allow snap elections to be held.

“We will continue as the incumbent government,” Mr Kurti said on Thursday. “First of all, we have to fight the Covid-19 pandemic together.”