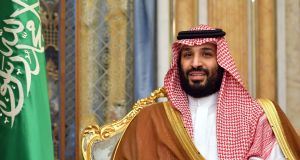 Mohammed bin Salman, the Crown Prince of Saudi Arabia, has warned that oil prices could skyrocket to “unimaginably high numbers” due to tensions with Iran, offering a grim prognosis for the world economy if Riyadh’s dispute with Tehran ramps up any further.

“If the world does not take a strong and firm action to deter Iran, we will see further escalations that will threaten world interests. Oil supplies will be disrupted and oil prices will jump to unimaginably high numbers that we haven’t seen in our lifetimes,” Prince Mohammed said in an interview with CBS on Sunday evening.

Tensions between the two countries flared up dramatically this month after drone and missile attacks hit Saudi oil facilities, triggering a big disruption to supply and a temporary spike in oil prices.

Iran has denied any involvement in the attacks and backed claims by Yemen’s Houthi rebels that they launched the strikes. Washington and Riyadh have dismissed suggestions the assault was launched from Yemen, saying the weapons were Iranian and the strikes came from the north.

Prince Mohammed said he hoped that a military response could be avoided, and warned that war between the two countries would have devastating consequences far beyond Saudi Arabia. “The region represents about 30 per cent of the world’s energy supplies, about 20 per cent of global trade passages, about 4 per cent of the world GDP. Imagine all of these three things stop,” he said. “This means a total collapse of the global economy, and not just Saudi Arabia or the Middle East countries.”

The attacks on Abqaiq, the world’s largest oil processing plant, and Khurais oilfield temporarily knocked out more than half the world’s top exporter’s crude production, underlining the vulnerability of Saudi’s oil infrastructure.

The kingdom is Washington’s closest Arab ally and has been a staunch supporter of the decision by Donald Trump, US president, to withdraw from the 2015 nuclear deal Iran signed with world powers and impose crippling sanctions on the Islamic republic.

Iran, which has repeatedly threatened to disrupt oil and petrochemical flows through the Gulf if US sanctions prevent it from exporting crude, has ruled out talks with the US until sanctions are lifted. Prince Mohammed said Mr Trump should “absolutely” negotiate with Hassan Rouhani, the Iranian president, but said officials in Tehran “don’t want to sit at the table”.

The interview with CBS featured a lengthy segment on the murder of Jamal Khashoggi, the Saudi journalist and columnist for the Washington Post, who was brutally killed by Saudi agents at the kingdom’s consulate in Istanbul last year.

Saudi authorities have blamed Khashoggi’s grisly murder on a rogue operation but two advisers to the crown prince were implicated in the killing, including his top aide Saud al-Qahtani, and Ahmed Assiri, the deputy intelligence chief.

Both advisers were dismissed but Saudi activists fear Mr Qahtani is still close to the royal court. A report by Agnes Callamard, the UN special rapporteur on extrajudicial executions, said in June that Prince Mohammed should be investigated over the killing because there is “credible evidence” that he and other senior officials were responsible.

Prince Mohammed lamented the murder of Khashoggi as a “heinous crime” and said he took “full responsibility” for it as Saudi Arabia’s effective leader. He also said that if there were any information implicating him in the crime, it should be brought forward publicly. – Copyright The Financial Times Limited 2019