Greece moves to step up deportations after migrant camp fire 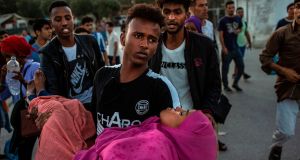 A migrant carries a woman during clashes with police outside the refugee camp of Moria on the Greek island of Lesbos on Sunday. Photograph: Angelos Tzortzinis/Getty Images

Greece aims to deport 10,000 migrants by the end of next year, the government said on Monday, following a deadly fire and clashes at its biggest migrant camp, which is massively overcrowded.

A woman was killed on Sunday in a blaze that broke out in the Moria camp on Lesbos island. The fire, the cause of which remains unknown, quickly escalated into clashes between asylum seekers and police. More than a dozen people were hurt.

Moria has mushroomed into the size of a small town of at least 12,000 people, four times its capacity, according to official figures. Violence is common but Sunday’s clashes were the most serious in many months and came as Greece deals with a resurgence in migrant and refugee flows from Turkey.

As well as increasing deportations, the government decided at a cabinet meeting on Monday to tighten its borders and build what it called “closed centres” for undocumented migrants and rejected asylum-seekers who are to be deported, government spokesman Stelios Petsas said.

He said Greece was now dealing with “a problem of migration, rather than a refugee problem”, citing the nationalities of new arrivals. According to United Nations data, the majority are Afghan families.

About 24,000 asylum-seekers are stranded on Greek islands in “horrendous” conditions, according to the aid agency Médecins Sans Frontières (MSF).

Greece’s five island camps have long struggled to accommodate the growing number of asylum seekers, which in August rose to the highest in over three years. New arrivals are not permitted to leave the islands until their claims are processed, under a 2016 European Union deal with Turkey.

On Sunday, plumes of black smoke rose above Moria, a collection of flimsy tents and containers in a disused military base, which has spilled over into an adjoining olive grove. Police fired tear gas to disperse crowds, which included children.

“No one can call the fire and these deaths an accident,” said Marco Sandrone, MSF’s field director. “This tragedy is the direct result of a brutal policy that is trapping 13,000 people in a camp made for 3,000.”

The government has started moving asylum seekers to mainland camps in a bid to ease overcrowding, and plans to transfer at least 3,000 people by the end of October, a government official said.

“If, upon arrival, foreigners do not comply with their transfer to other structures, they are presumed to not wish for protection and are referred to return procedures,” Petsas said. “Our goal is to prevent people from entering the system if they do not comply from the outset.”

The International Rescue Committee (IRC) charity on Monday called on the government to immediately evacuate all vulnerable people, including unaccompanied children, who are currently holed up in Moria in unsanitary conditions with few toilets and showers and few doctors.

“We are constantly bracing ourselves for a new tragedy,” said Dimitra Kalogeropoulou, the IRC’s Greece director. “We cannot accept the deaths of more people in a place they thought they had finally found safety.” – Reuters