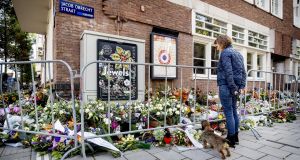 Tributes placed in front of the office where lawyer Derk Wiersum was shot dead, in Amsterdam. Photograph: EPA/Koen Van Weel

Given that the Netherlands has a well-rooted illegal drugs industry, with Rotterdam as its trans-shipment hub, there was some surprise last week when the government responded to the killing of a lawyer in a gangland court case with grand plans for a new DEA-style “narco brigade”.

Of course, the government must act when a lawyer and part-time judge, with no protection, is gunned down metres from his wife by a teenage hitman. It must act not least because the hoodlum who ordered the assassination is sending society a message that sneers: Look! I’m untouchable.

Yet when justice minister Ferd Grapperhaus faced the cameras with measures to combat the cold-blooded killing of 44-year-old Derk Wiersum, he seemed devoid of any political sense that he might be alienating those whose expertise he needs most: the police and the security services.

Rather than acknowledge that police already possess unrivalled knowledge of Amsterdam’s organised crime underbelly, have consistently warned about the creation of a “narco-state”, and have appealed time and again for more funding, he opted instead for a shiny media bauble: a new agency based on the Drug Enforcement Administration in the US.

The new “narco brigade”, said Grapperhaus, would be an “elite” unit of at least 100 officers. Working under the national police service, it would include officers with specialised knowledge of drugs gangs. It would liaise with Interpol and Europol to disrupt supply and distribution chains.

But most of all, he declared, it would have funding, lots of funding. “We have to accept that we must invest heavily in this.”

The collective sighs of the police unions could be heard from one end of the country to the other. “We have been saying this year after year after year,” said one spokesman. “And all this ‘new’ expertise, it already exists.”

Grapperhaus then went further. Having called in the national counter-terrorism co-ordinator on the day of the killing, he now went for the kitchen sink as well, saying he also planned to use the domestic intelligence service, the AIVD, and its military equivalent, the MIVD.

That may have been a step too far. Intelligence services are notoriously sensitive to what might be construed as undue enthusiasm by a government having a bad day. So the embarrassing question quickly arose as to whether the minister fully understood the delicate nuance of the services’ mandate.

The job of the security services, secret intelligence expert Willemijn Aerdts of Leiden University told national broadcaster NOS, was not to act as an extension of the public prosecutor’s office and gather evidence, but to protect national security and “democratic legal order”.

Not alone that, but while the security services were mandated to operate overseas – where the prime suspect in the Wiersum killing, Ridouan Taghi, is believed to be in hiding – it was emphatically not their job to ensure that a suspect was brought to justice.

In fact, where to do so might compromise other intelligence gathering, they could legitimately refuse.

For those reasons among others, they had made abundantly clear in the past that they were not suitable players in the “war on drugs”.

Can they be leaned on? “If the government can argue that with the murder of a lawyer a line has been crossed which constitutes an attack on the democratic constitutional state, there might be an argument,” says Aerdts.

Certainly, while Grapperhaus wakes up – as he did last week with De Telegraaf – to headlines declaring that the Netherlands is living in “a new golden age for drugs bosses”, any option, no matter how wrongheaded, must seem attractive.