Kurdish group in Syria open to talks with Assad regime 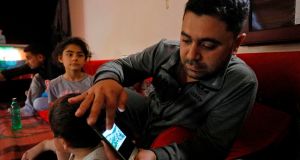 Syrians displaced from the city of Afrin display pictures of their homes. Photograph: Delil Souleiman/AFP/Getty

The Kurdish-dominated Syrian Democratic Council has declared it is ready for unconditional talks with the Syrian government.

The council, the political arm of the US-supported Syrian Democratic Forces (SDF), welcomed the prospect of a “summit for Syrians”, a proposal put forward by a delegation from a domestic opposition group dispatched by Damascus to mediate between the government and the Kurds.

Senior council member Hekmat Habib said that since the SDF and government controlled most of the country, “these are the only two forces that can sit at the negotiating table and formulate a solution to the Syrian crisis”.

Last month Syrian president Bashar al-Assad called for dialogue with the Kurds and warned Damascus would resort to force if it could not extend its sovereignty to the 25-30 per cent of Syria held by the SDF.

Its return to Damascus rule would leave only the northwestern province of Idlib and scattered pockets of territory outside government control. With SDF aid, these areas could be recovered if there were no interference from external powers.

To opt for rapprochement with Damascus, the US-trained, -armed and -funded SDF will have to break with its sponsor, which, with its western allies, continues to call for regime change. The Kurds never have done so.

The US administration is divided, however. President Donald Trump calls for withdrawal before year’s end of 2,000 US special forces deployed with the SDF, while defence secretary James Mattis argues this would be a “strategic blunder” since it would enable Assad to “take advantage” of a “power vacuum”. He said a US evacuation would depend on progress in stalled UN-brokered peace talks.

The Kurds’ trust in the US has come under severe strain since Turkey invaded and occupied the Kurdish-majority district of Afrin early this year. Turkey’s surrogate Syrian militia – drawn largely from al-Qaeda offshoots – expelled Afrin’s Kurdish defenders and civilians and settled evacuated fighters from eastern Ghouta in Kurdish homes to prevent the return of refugees.

Last week the Kurds felt doubly abandoned when the US and Turkey reached an agreement for the withdrawal of SDF fighters from the town of Manbij, liberated by the SDF from the Islamic State terror group in 2016.

According to Turkish spokesmen the SDF will be disarmed before it evacuates to the eastern bank of the Euphrates river, and the Kurdish-run Manbij military administration will be disbanded and replaced with a Turkey-friendly body. US troops and French commandos will remain in Manbij.

The deal is meant to repair damaged US-Turkish relations at the expense of the Kurds, who have been used to secure American, rather than Kurdish, interests in Syria. Ultimately, Assad pointed out, the Kurds are Syrians and should choose their country over a foreign power.

Mr Habib made the Kurds’ position clear when he said he expected non-Syrian forces to leave, including those of the US. “We are looking forward in the next phase to the departure of all [foreign] military forces from Syria and the return to Syrian-Syrian dialogue.”