Lebanese call for government to resign in ‘WhatsApp revolution’ 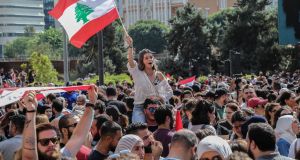 Protesters carry Lebanese flags and chant slogans in front the government palace during a protest in Beirut, Lebanon on Friday. Photograph: Nabil Mounzer/EPA

Thousands of angry Lebanese have poured into the streets of towns and cities to express their frustration over the deteriorating situation in the country and have vowed to continue their protests until the government resigns.

The trigger for the protests was cabinet approval of a tax on WhatsApp calls, prompting demonstrators to dub the popular eruption the “WhatsApp Revolution”. Although the government has announced the withdrawal of the tax, this was too little, too late.

It is a spontaneous mobile revolution. Young men and women, many wearing surgical masks or kerchiefs over their noses, roam Beirut’s streets on motor scooters or on foot.

Women walk side streets with bags of shopping and middle-aged men gather on corners to discuss the situation and, somewhat bewildered, wait to see what will happen next.

Former finance minister Georges Corm told The Irish Times, “I’m optimistic. It’s great. There are no sectarian flags. When I walk in the streets I hear people talking the same language. It’s an opportunity for Lebanese to get out of mismanagement and corruption [which] the government cannot fix. It let the people down. The political class has closed on itself and cannot make contact with its external environment.”

WhatsApp became the trigger because Lebanese of all ages and backgrounds rely on the messaging service to speak to each other and to their relatives and friends living abroad.

For the poor and middle class, in particular, WhatsApp is indispensable at a time of rising prices, fresh taxes, and economic collapse. Squabbling among government ministers prevents them from tackling Lebanon’s ailing economy and initiating long-overdue reforms.

So far there has been no mass rally, comparable to the throng in Cairo’s Tahrir Square in January 2011, but the Lebanese are motivated by the same grievances. Frustration flared in July when the government imposed an austerity budget in a bid to reduce Lebanon’s public debt, which has risen to 150 per cent of GDP.

The ongoing countrywide protest, which began late on Thursday, is the most serious since 2015 when a refuse collection crisis launched mass anti-government demonstrations.

In Beirut security forces dispersed crowds at dawn in Friday with tear gas and rubber bullets after they tried to storm the seat of government. At least 23 protesters and 60 security officers were wounded. Two Syrian workers died of suffocation after the building where they were staying was torched by rioters.

1 Irish tourists excluded from visiting Greece and Croatia
2 Patience wearing thin as three parties crawl towards a government
3 Quarantine will cease within fortnight, Ryanair CEO claims
4 Covid-19: Pupils may be kept apart in groups and pods when schools reopen
5 Protests flare up after US officer charged with murder of George Floyd
Real news has value SUBSCRIBE