Israel says airstrikes in Syria send a message to Iran 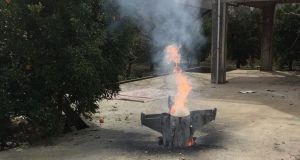 Flames rise from a missile, which according to the Lebanon national news agency appears to be part of a Syrian air defense missile targeting an Israeli warplane which landed in a lemon grove, in Hasbani village, southwest Lebanon, on Saturday. Photograph: AP

An Israeli minister has said that by striking key Iranian sites in Syria it sent a clear message that it will not tolerate an Iranian military foothold on its doorstep.

Minister of intelligence Israel Katz said it will take the Iranians time to “digest, understand and ask how Israel knew how to hit those sites”.

After shooting down an Iranian drone that entered its airspace, Israel launched a widespread offensive on Saturday in Syria.

Israel has recently issued several stern warnings about the increased Iranian involvement along its borders with Syria and Lebanon.

Israel also said it destroyed the Syrian military’s main command and control bunker in its most devastating assault there in decades.

It said on Sunday that they included Syrian troops as well as Syrian and non-Syrian allied troops.

The Observatory is based in Britain and monitors the war in Syria through activists on the ground.

The United States backed Israel and expressed deep concern over the latest escalation.

She said: “Iran’s calculated escalation of threat and its ambition to project its power and dominance, places all the people of the region — from Yemen to Lebanon — at risk.”

“The US continues to push back on the totality of Iran’s malign activities in the region and calls for an end to Iranian behaviour that threatens peace and stability,” she said.

Israel and Iranian-backed forces based across the border. The F-16, one of at least eight Israeli planes despatched in response to what

Israel said was an Iranian drone’s incursion into its airspace earlier in the day, was hit by a Syrian anti-aircraft missile and crashed in northern

Israel, an Israeli official told Reuters. Both pilots ejected and were injured, one critically.

Israel then launched a second and more intensive air raid, hitting what it said were 12 Iranian and Syrian targets in Syria, including Syrian air defence systems.

Iran’s involvement in Syria in support of President Bashar al-Assad in a nearly 7-year-old civil war - including the deployment of Iran-backed forces near the Israeli-occupied Golan Heights - has alarmed Israel, which has said it would counter any threat.