US President Donald Trump says former White House aide Rob Porter who's been accused of domestic abuse did a "wonderful job" when he was working in his administration. 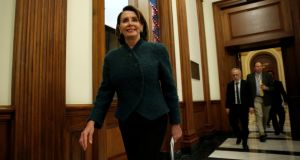 House minority leader Nancy Pelosi after a vote to end a government shutdown on Capitol Hill. The shutdown was the second in less than three weeks. Photograph: Joshua Roberts

The controversy over the departure of a White House staff member accused of domestic abuse deepened on Friday as US president Donald Trump praised the former aide in his first public comments on the matter.

Rob Porter, who served as the White House staff secretary, left his position this week after it emerged that two ex-wives had accused him of physically abusing them. Mr Porter’s security clearance to work in the White House had been withheld pending a decision by the FBI, which interviewed both women in January.

One of the ex-wives had secured a barring order against Mr Porter in 2010. She said she had also informed the FBI about police calls she had made from her house during that time.

Asked about the controversy during a meeting in the Oval Office on Friday, Mr Trump said he wished Mr Porter well.

“He worked very hard. I found out about it recently and I was surprised by it. But we certainly wish him well. It’s obviously a tough time for him. He did a very good job when he was in the White House,” he said.

“We hope he has a wonderful career, and hopefully he will have a great career ahead of him. But it was very sad when we heard about it, and certainly he’s also very sad.”

He also stressed Mr Porter’s contention that he is innocent. “He says he’s innocent, and I think you have to remember that.”

The scandal has left the White House reeling. It has emerged that White House officials were aware last August that the allegations were preventing Mr Porter from obtaining full security clearance. Mr Porter informed White House counsel Donald McGahn in September that he had been interviewed by the FBI for a second time.

Deputy press secretary Raj Shah admitted on Thursday: “I think it’s fair to say we all could have done better over the last few hours or last few days in dealing with this situation.”

Questions have arisen in particular about the judgment of White House chief of staff John Kelly, who reportedly knew of some of the allegations in November. Mr Kelly described the 40-year-old aide as “a man of true integrity and honour” in a statement on Wednesday that was drafted in part by communications director Hope Hicks, who has been romantically involved with Mr Porter.

But as photographs emerged showing Mr Porter’s ex-wife Colbie Holderness with bruises she alleges were inflicted by her ex-husband, Mr Kelly issued a statement the following day. While he said there was “no place for domestic violence in our society”, he said he stood by his initial comments, adding that every individual deserves the right to defend their reputation.

The controversy continued on the back of a dramatic 24 hours which saw the US government shut down overnight on Thursday, after Republican senator Rand Paul delayed a key Senate vote on a budget Bill designed to keep the government open.

The shutdown – the second to occur in just under three weeks – kicked in at 12.01 am on Friday. While the House of Representatives voted to approve the Bill at about 5.30am, it was not until Mr Trump signed the legislation after 8am that the government officially reopened.

The spending Bill proposes new funds for defence and other domestic spending priorities. But the sanctioning of $300 billion (€245 billion) in extra expenditure has rattled some Republicans, with 67 Republican representatives voting against the measure in the House of Representatives.

Prospects of a widening budget deficit have added to market concerns about the health of the US economy. US stock markets ended one of the worst weeks since the financial crisis on Friday, with all the main indices sustaining sharp losses. Some investors believe the US economy is showing signs of overheating, a situation that could increase inflationary pressures and lead to faster-than-expected interest rate hikes. Others believe that this week’s sell-off could be a natural correction to an ever-strengthening stock market in recent years.