Israel’s attorney general: the man who will decide Netanyahu’s fate 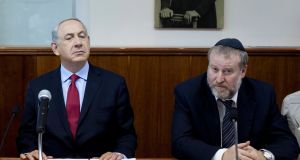 Critics suspect that Mandelblit, having previously served as Netanyahu’s cabinet secretary, and once widely considered a Netanyahu loyalist, remains beholden to the prime minister who promoted him. Admirers say the law is Mandelblit’s only agenda and his moral compass.

Either way, Mandelblit, who rose from relative obscurity as a military prosecutor, is likely to become the most scrutinised person in Israel in the coming months. After the Israeli police recommended on Tuesday that Netanyahu be charged with bribery, fraud and breach of trust in two corruption cases, Mandelblit became the one who will ultimately decide, in consultation with state prosecutors, whether the evidence warrants taking Netanyahu to court.

Mandelblit rose through the ranks of the military justice system to become the military advocate general. He was catapulted into the political limelight when Netanyahu appointed him as his cabinet secretary in 2013. In his mid-50s, and a father of six, Mandelblit is known to be an avid soccer fan. He become an observant Jew in his mid-20s and wears a black skullcap.

His appointment two years ago to the post of attorney general was criticised by some legal experts as too swift a transition into a role that requires absolute independence as the guardian of the law and the public interest.

Although Netanyahu has accused the left and the news media of plotting to oust him by legal means because they cannot beat him at the ballot box, Mandelblit hardly fits the profile of a politically motivated insurgent intent on bringing down the government, often described as the most right-wing and religious in Israel’s history.

On the contrary, Mandelblit, who has closely followed the police investigations all along, has been accused of dragging his feet to stall them. What started as small, weekly demonstrations on Saturday nights outside Mandelblit’s house in the city of Petah Tikva, east of Tel Aviv, recently grew into several mass rallies in Tel Aviv against corruption and what many of the protesters saw as procrastination by the authorities.

The police recommendations relate to two cases in which Netanyahu is a suspect: a gifts-for-favours affair known as Case 1,000, involving Hollywood producer Arnon Milchan and an Australian businessman, James Packer; and a second scandal, called Case 2,000, in which Netanyahu is suspected of backroom dealings with Arnon Mozes, publisher of the popular newspaper Yediot Aharonot, to ensure more favourable coverage.

His supporters say Mandelblit has exercised caution regarding the cases, aware of the responsibility of potentially bringing down a prime minister. If he indeed decides to press formal charges, Netanyahu will be the first sitting prime minister in Israel to be indicted.

But Mandelblit has not shied from controversy. In September, he said that he intended to bring fraud charges against Sara Netanyahu, the prime minister’s wife, pending a hearing, accusing her of misusing some €80,000 in public funds for takeout meals and mismanagement of the prime minister’s official residence.

Mandelblit has avoided giving interviews but has been outspoken at legal forums, often on camera. During his time in the military, he worked with human rights organisations, saying he valued their contributions in dealing with Palestinian complaints and helping uncover the truth.

He has more recently broken with Netanyahu on issues regarding land ownership in the West Bank, insisting on the evacuation of an illegal settlement outpost that Netanyahu and his political allies were trying to salvage.

Mandelblit also opposed legislation to bar the police from issuing recommendations to charge public figures. After a concerted effort by allies of Netanyahu, legislation barring the police from issuing recommendations passed in December – but only on the condition that it would not apply to the current investigations against the prime minister. – New York Times