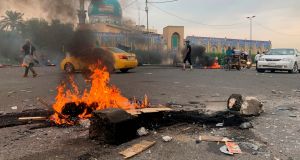 Iraqi protesters blocked roads in Baghdad on Sunday to increase pressure on the government to resign after more than a week of renewed mass demonstrations.

Protesters blocked one road with burning tyres and barbed wire, and held up a banner reading “Roads closed by order of the people”.

They appeared to be borrowing a tactic from Lebanon, where similar anti-government demonstrations have been under way since October 17th, and where protesters have repeatedly blocked major roads.

Tens of thousands of protesters have gathered in Baghdad’s central Tahrir Square and across southern Iraq in recent days, calling for the overhaul of the political system established after the 2003 US-led invasion.

Protesters have also taken over a large tower in the square that was abandoned after it was damaged in the war.

Thousands of students have missed classes to take part in the protests, blaming the political elite for widespread corruption, high unemployment and poor public services.

Security forces have fired tear gas, rubber bullets and live ammunition at the protesters, killing more than 250 in two waves of demonstrations since early October.

Since the protests restarted on October 25th after a brief hiatus, there have been near-continuous clashes on two bridges leading to the heavily-fortified Green Zone, the headquarters of the government and home to several foreign embassies.

He also called for a new election law and said he would approve early elections once it is enacted, but that process could take weeks or even months.

The protests have only grown since his announcement.

On Sunday, a 24-year-old veterinary student attended the demonstrations in Baghdad carrying a cat, with a sign around its neck reading “I am coming to demand my rights”.

The student, who did not give her name for fear of repercussions, joked that she was willing to treat the country’s politicians free of charge. –AP