US warns Iran could face ‘strongest sanctions in history’ 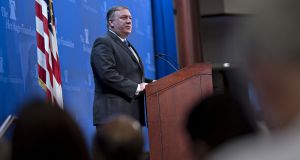 In a major speech in Washington on Monday, US secretary of state Mike Pompeo warned Iran would face “the strongest sanctions in history” if it did not adhere to a dozen requirements. Photograph: Andrew Harrer/Bloomberg

The United States escalated tensions with Iran on Monday, threatening new sanctions on the country if it does not meet a strict set of demands.

In a major speech in Washington, US secretary of state Mike Pompeo warned Iran would face “the strongest sanctions in history” if it did not adhere to a dozen requirements, including cessation of all nuclear enrichment and withdrawal from Syria and Yemen – demands Iran is highly unlikely to meet.

In a worrying sign for the US’s allies – particularly in Europe – Mr Pompeo’s remarks were also seen as advocating a change of leadership in Iran.

“At the end of the day, the Iranian people will get to make a choice about their leadership. If they make the decision quickly, that would be wonderful. If they choose not to do so, we will stay hard at this until we achieve the outcomes that I set forward today,” Mr Pompeo said, after directly mentioning Iran’s president Hassan Rouhani and foreign minister Javad Zarif.

“There is only one way to read it and that is that Trump administration has wedded itself to a regime-change strategy to Iran, one that is likely to alienate our allies,” she said, adding that it had “dubious prospects for success”.

The European Union has been scrambling to save the Iran nuclear deal, under which Tehran agreed to curb its nuclear programme in return for an easing of sanctions. President Donald Trump announced the US’s withdrawal from the deal earlier this month.

Mr Pompeo in his speech made no mention of any kind of follow-up agreement to the deal, which is officially known as the JCPOA and was signed in 2015 by Iran, the US and five other powers. EU foreign policy chief Federica Mogherini said in response to Mr Pompeo’s speech: “There is no alternative to the JCPOA.”

Washington’s toughening stance on Iran comes as Mr Trump is due to meet South Korean president Moon Jae-in at the White House on Tuesday. The meeting takes place amid reports that the US president is increasingly concerned about the prospects for the planned summit with North Korean leader Kim Jong-un in Singapore on June 12th.