Some 86,000 Iranian pilgrims to attend annual Hajj for the first time in two years 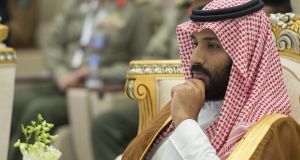 The rift that has divided the Middle East between Sunnis and Shias and fuelled proxy wars in Syria and Yemen appears to have eased, enabling 86,000 Iranian pilgrims to attend next week’s annual Hajj for the first time in two years as well as an exchange of diplomatic visits between Riyadh and Tehran that could prepare the way for restoration of relations severed early last year.

The bitter breach began with Tehran’s boycott of the Hajj following the 2015 stampede that killed 465 Iranians, and intensified when Riyadh severed diplomatic relations due to Iranian protests over the execution of dissident Saudi Shia cleric Nimr al-Nimr in January 2016.

The first indication that Riyadh and Tehran might ease tensions came on August 1st, when their foreign ministers shook hands at an Organisation of Islamic Co-operation’s gathering in Istanbul. Subsequently, Saudi crown prince Mohamed bin Salman called on Iran’s ally, the Shia fundamentalist government in Baghdad, to mediate between Tehran and Riyadh, hosted Iraqi dissident Shia cleric Muqtada al-Sadr in Saudi Arabia, and pledged to fund Iraq’s post-war reconstruction. Riyadh is eager to court Baghdad with the aim of weakening Iranian influence in Iraq.

These initiatives on the bilateral level, initiated by bin Salman, have been accompanied by other shifts in Saudi policy. On Syria, the Riyadh-based Syrian opposition coalition has been told to negotiate with Damascus on the basis that Syrian president Bashar al-Assad will stay in office. Since the coalition failed to capitulate last week during a meeting with two other opposition groups, the Saudis have vowed to remove hard-line coalition members answerable to Qatar.

Since June, Saudi Arabia and its allies have tried to deflect attention from their failed policies by shunning and boycotting Qatar, allegedly due to its ties to Iran, support for jihadis in Syria, and sponsorship of Al Jazeera.

Although Riyadh seeks to ease relations with Tehran, Qatar’s decision to restore full diplomatic ties with Iran, which were cut last year, could intensify tensions between the kingdom, its allies and its tiny neighbour.

On Yemen, the Saudis are reportedly under pressure from the United Arab Emirates – a partner in the war but a critic of Saudi management – to ditch Riyadh-based Yemeni president Abdel Rabbo Mansour Hadi, who has undermined efforts to make peace with tribal Houthi rebels, and to replace him with a figure who would end the Saudi-led war which has killed 10,000 Yemeni civilians and devastated the country.

While Saudi policy changes have been taking place without fanfare, it is likely the hyper-ambitious crown prince – who sponsored the 2015 insurgent surge in Syria and launched the Yemen war – has been obliged to reconsider the kingdom’s failure to project power through warfare and could revert to traditional and chequebook diplomacy.

Saudi Arabia is not the only country revising its policies. Although on opposite sides of the Syrian war, Turkey and Iran have pledged join forces against the Kurds in their countries and Syria to prevent the emergence of Kurdish autonomous or independent entities.

On Syria, although Iran continues to back the government, Turkey has told al-Qaeda-linked Jabhat Fatah al-Sham, which rules the northwest Idlib province, that the group has to disband and merge its fighters with non-al-Qaeda groups. Turkey seeks to ensure it has a grip on territory in northern Syria by creating allies not branded “terrorists” by the UN.

The Jabhat is unlikely to comply and could face the US-led coalition and the Syrian army once they defeat Islamic State in Syria.

The main reasons for these shifts in the Middle East are the failure of regional and international proxy wars in Syria to effect regime change, the inability of the Saudi-led coalition to defeat the Yemeni rebels, and uncertainty over Trump administration policies in the region.