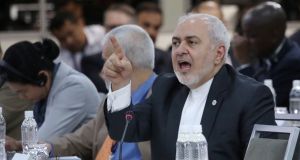 Dramatic images of armed and masked Iranian Revolutionary Guard commandos rappelling from a helicopter on to the deck of a British-flagged oil tanker in the Strait of Hormuz have demonstrated Tehran’s determination to defend its interests in the Gulf and elsewhere.

Iran’s capture on Friday of the Stena Impero followed the Royal Marine’s seizure in the Strait of Gibraltar of Grace 1, a supertanker with a cargo of Iranian oil Britain claims was bound for Syria in violation of EU sanctions.

Iranian foreign minister Mohammad Javad Zarif called the seizure of Grace 1 “piracy” and said it was not bound for Syria but another Mediterranean country, without revealing its destination due to US sanctions on anyone buying Iranian oil. Iran also argues it is not bound by EU sanctions on Syria.

Britain had offered to release Grace 1 if Iran guaranteed it would not sail to Syria and the UK was under pressure from Germany and France to free the ship, but on Friday Gibraltar’s supreme court extended the vessel’s detention for 30 days, triggering the Revolutionary Guards’ raid.

Although Iran does not want war, former commander of the guards Maj Gen Mohsen Rezai wrote, “we are not going to come up short in reciprocating”.

Tehran is determined to avert further tanker snatches as 80 per cent of Iran’s foreign earnings come from oil exports. It wants to avoid appearing weak and unable to respond to actions it regards as provocations. Iran has a long coast in the Persian Gulf and the Arabian Sea which are connected by the Strait of Hormuz through which 20 per cent of the world’s oil flows.

Iran’s supreme leader Ayatollah Ali Khamenei warned, “If Iran can’t export oil [through Hormuz], nobody else will.” While Iran is unlikely to halt shipping, the Revolutionary Guards have shown that Tehran means business.

France and Germany promptly backed Britain over the Stena Impero. Since Spanish officials revealed that Grace 1 was seized at the behest of the Trump administration, in Tehran’s view all three have lost credibility as EU mediators between Tehran and Washington.

The Trump administration is pursuing a policy of “maximum pressure” on Tehran to negotiate a new deal to replace the 2015 agreement for dismantling Iran’s nuclear programme in exchange for lifting sanctions. The US withdrew from the agreement in May 2018 and tightened sanctions on Iran, cutting oil exports by 90 per cent and driving its economy into recession.

Having honoured its commitment to the deal for more than a year after US withdrawal, Iran has responded by enriching uranium to a slightly higher level than the limit set and increasing its stockpile beyond the 300kg allowed.

Under article 26 of the deal, the US committed to refraining from interfering with Iran’s benefits or imposing sanctions as Iran would regard this as “grounds to cease performing its commitments under this [agreement] in whole or in part”.

Tehran argues enriched uranium has accumulated because the US has prevented Iran from exporting material exceeding the cap set by the deal. Zarif said its actions could be reversed “within hours” once sanctions were suspended.

In an attempt to induce Washington to end sanctions, Zarif said Iran was prepared to ratify the additional protocol to the nuclear Non-Proliferation Treaty, thereby strengthening International Atomic Energy Agency inspections of Iran’s facilities. Under the nuclear deal, Iran has been subjected to intrusive monitoring. Zarif said ratification could take place “tomorrow”.

He reiterated Iran would not reopen negotiations on the 2015 deal as this would amount to “buying a horse twice”. The Washington Post quoted Arms Control Association chief Daryl Kimball as saying Zarif’s proposal could lock in Iran’s long-term commitment to the deal, a declared US goal.

India set to overtake us as country worst hit by coronavirus 10:29
Trump gives blessing to deal to allow TikTok to continue to operate in US 09:12
Envelope with deadly poison ricin addressed to White House intercepted 09:00
Trump says he will nominate a woman next week to supreme court seat 08:53
32 arrested at anti-lockdown protest in London 22:20