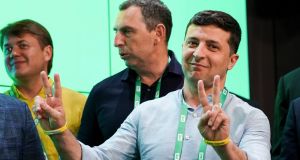 Ukrainian president Volodymyr Zelenskiy, right. With 79 per cent of votes counted, Mr Zelenskiy’s Servant of the People party was set to claim about 253 of 424 available seats. Photograph: Evgeniy Maloletka/AP

The party of Ukrainian president Volodymyr Zelenskiy is poised to secure an overall majority in the country’s parliament, after a historic election victory by novice politicians who promise to deliver sweeping reforms.

With 79 per cent of votes counted after Sunday’s election, Mr Zelenskiy’s Servant of the People party was set to claim about 253 of 424 available seats, far ahead of four other parties that will enter parliament alongside about 50 independent deputies.

Servant of the People took about 43 per cent of votes for party lists, but did even better than expected in individual constituencies where representatives of traditional parties and local business interests were expected to retain control: in those districts, the new party took at least 126 of 199 seats that were up for grabs.

If the results are confirmed, Servant of the People – recently formed and named after a TV comedy in which Mr Zelenskiy plays a fictional president – will be the first party in Ukraine’s post-Soviet history to enjoy an overall parliamentary majority.

Servant of the People did not include any former deputies on its party list, so its stunning debut will bring ranks of new people into parliament and clear out an old guard that is notorious for cronyism, corruption and ineffectiveness.

Mr Zelenskiy (41) has spoken favourably about a possible a coalition with another new party, Holos (Voice), led by Ukrainian rock star Svyatoslav Vakarchuk, which is expected to take about 21 seats in parliament and shares Servant of the People’s desire to fight graft and stop wealthy oligarchs influencing politics.

The winning party’s official leader, Dmytro Razumkov, said on Monday that it may seek to govern alone, however.

“We can co-operate in parliament with all political forces that share our ideological views and our vision of how our country should develop,” he said.

“But apparently there’s no need to talk about a coalition for now, because we see that our results are pretty good,” he added, while playing down speculation that Mr Vakarchuk could be a candidate for the post of prime minister.

“I think we have enough people in our team to meet the challenges that the country faces. We have two or three people for every post,” he insisted, without naming any potential ministers.

Mr Zelenskiy said on Sunday night that his party would invite Mr Vakarchuk for talks, but the singer said on Monday he had not received such an offer.

After a landslide presidential election victory in April, Mr Zelenskiy vowed to strengthen Ukraine’s rule of law, attract foreign investors and try to end a five-year war with Russian-led separatists, while pursuing integration with the West.

“As with the presidential election, the [parliamentary] election was an example of democracy and freedom for the whole region,” said Annegret Kramp-Karrenbauer, the leader of Germany’s ruling CDU party.

“We expect [Zelenskiy] to go through with the reforms, to fulfil the hopes which many Ukrainians have in him,” she told the AFP news agency.