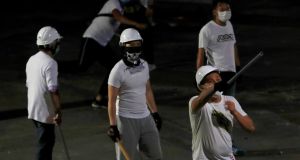 Men in white T-shirts with poles are seen in Yuen Long after anti-extradition bill demonstrators are attacked at a train station, in Hong Kong. Photograph: Tyrone Siu/Reuters 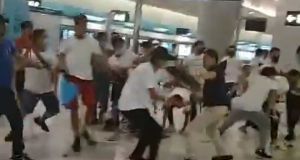 A mob of men in white T-shirts clashing with pro-democracy protesters on the platform of Yuen Long station in Hong Kong. Photograph: AFP/Getty Images

The Hong Kong government has come under pressure from lawmakers to guarantee public security after thugs, accused of being triad criminal gang members, beat up pro-democracy protesters in a deepening of a political crisis in the Asian financial hub.

Pro-democracy politicians on Monday criticised police for arriving too late to stop at least 45 people being injured late on Sunday night in violence at a metro station in the outlying district of Yuen Long, near the border with mainland China.

The scuffles erupted when the men used sticks to beat protesters returning home from central Hong Kong where they had participated in a demonstration, part of a running series of weekend protests against a proposed extradition Bill that have ended in fierce confrontations with police. The beatings shocked a city in which such violence is rare.

“I am furious towards the police for not sending anyone to control the situation,” said Democratic party lawmaker Lam Cheuk-ting, who was also injured in the violent scuffles. He alleged the men were members of Hong Kong’s triads – organised crime gangs that operate in the territory. “Hong Kong is now allowing the triads to do what they want, to beat people on the street.”

Hong Kong is facing its worst political crisis since its handover from Britain to China 22 years ago following the protests against the extradition Bill, which would allow criminal suspects to be sent to China for trial.

The territory’s leader, Carrie Lam, has suspended the Bill but the protests have continued, leading to calls for its complete withdrawal, including from the city’s business community.

The Hong Kong General Chamber of Commerce, a major business association in the territory, in an unusually strongly worded statement on Monday, condemned the violence on Sunday but called on the government to formally withdraw the Bill “to show good faith”.

It also demanded the government enlarge public consultation on issues, make officials accountable for the “poor” handling of the Bill and establish a commission of inquiry into the tensions.

The mass protests also took a new twist at the weekend when demonstrators defaced Beijing’s Liaison Office in the territory – the first time they have targeted a building associated with the Chinese government during the anti-extradition protests.

“Such behaviours have blatantly challenged the authority of the central government,” the China Daily quoted the Hong Kong and Macao Affairs Office of the State Council, Beijing’s oversight body, as saying.

Pro-establishment politician Junius Ho, who has been criticised for shaking hands with some of the men accused of violent attacks, warned that there was now an impression the Hong Kong government had lost control over law and order in the city.

Aside from the Yuen Long violence, the mass protests have been marked by clashes between police and demonstrators.

“If this situation persists it will not be good for anyone . . . If anyone who would like to bring Hong Kong into total anarchy I think . . . this is not the right place for them to do it,” Mr Ho said in what appeared to be a warning to protesters.

Carolyn Law, an officer worker, drove to Yuen Long on Sunday, and tried to give people on the spot a lift home.

“When I reached the metro station. I saw more than 10 white-shirt people with weapons, with wooden sticks running down the stairs. The police were there running up. The police did not arrest any of them and did not chase them,” Ms Law told the FT, adding that she saw four people injured, including a pregnant lady.

“People were very, very mad. Shouting at the police, asking them why didn’t arriving earlier,” she said. – Copyright The Financial Times Limited 2019