Carl Beech alleged he was victim of group who kidnapped, raped, murdered boys in 1970s, 1980s 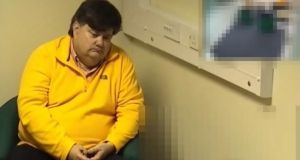 Crown Prosecution Service screengrab from the video of the interview in January 2016 of Carl Beech, who has been convicted of 12 counts of perverting the course of justice and one of fraud at Newcastle Crown Court. Photograph: CPS/PA Wire

A former nurse fabricated claims about a murderous VIP paedophile ring in Westminster that prompted a multimillion-pound Scotland Yard inquiry that tarnished the reputations of innocent public figures, a jury has found.

Carl Beech (51) alleged he was among the victims of an “establishment group” – including politicians and military figures – who kidnapped, raped and murdered boys in the 1970s and 1980s, triggering an ill-fated £2 million (€2.2 million) police investigation that shut without a single arrest being made.

The former NHS manager, known under the pseudonym “Nick”, was found guilty after a 10-week trial at Newcastle crown court of 12 counts of perverting the course of justice and one count of fraud over a £22,000 (€24,465) criminal compensation payout.

Beech, a vicar’s son, stood by his claims in court, giving a graphic account of the three child murders he alleged he had witnessed, insisting: “I was there and I know it took place.”

The jury’s decision brings an end to the unprecedented case, which has seen one of those falsely accused brand the Metropolitan police’s investigation a “fishing expedition” based on the “ravings of a fantasist”.

The trial heard how when Beech’s story had begun to unravel, he fled to a remote forested area of northern Sweden and going on the run last year.

Beech – himself a convicted paedophile after pleading guilty to child abuse image offences in a separate trial – alleged to the Metropolitan police in 2014 that when he was seven his stepfather, Major Raymond Beech, had begun ferrying him to depraved parties where he was sexually abused by a group of high-profile men.

His claims, pushed by the discredited Exaro news agency, were splashed across national newspaper front pages. The deputy leader of the Labour party, Tom Watson, met Beech to talk about his allegations, and the former health worker told the trial the politician was part of a “little group” supporting him.

The Metropolitan police officer leading the inquiry, Det Supt Kenny McDonald, had described Beech’s account as “credible and true” on TV news bulletins in December 2014. He retired on the eve of the trial.

Beech alleged the offences had taken place in an array of locations such as Dolphin Square, the exclusive private members’ Carlton Club, Elm Guest House in London, Heath’s yacht, military bases and London zoo. He claimed he had been ferried from school by a driver to the “parties”, where boys were abused by a group of men.

Brittan, Bramall and Proctor had their homes searched by police, causing dismay to them and their families, which was compounded when their identities became public. Bramall’s wife died without knowing her husband was to face no further action. Brittan died with the allegations hanging over him.

Beech informed Scotland Yard about three alleged child murders, including of his friend Scott who he said was deliberately mown down by a car in 1979 in a revenge hit-and-run. The murder occurred, Beech claimed, after he had been warned by Hanley not to have any friends.

Beech said he had tried to save another boy who he claimed was raped and strangled by Proctor. He alleged that, on a third occasion, Hanley had ordered Beech and three other boys to choose which of them was to die at an abuse session attended by Brittan and Proctor before a child was beaten to death. But the police could find no evidence to back up his claims.

Beech claimed he had developed a lifelong fear of water and could not swim because some of the abuse had involved him being held underwater and thrown in a pool. But numerous pictures showed him enjoying swimming, including one snap of him with flippers, mask and snorkel.

He also said he had regularly been taken out of school to be abused by the gang, but his attendance record was found to be exemplary. He told police the locations for the abuse had come from his head, yet searches of his computers revealed he had done extensive research.

Proctor gave emotional testimony from the witness box during the trial, telling jurors the Metropolitan police’s high-profile investigation was a “fishing expedition” and a charade.

Jurors at the trial were also played a video of 95-year-old Bramall, who did not give evidence in person because of ill-health, thumping the desk as he told detectives he had no sexual interest in children.

In the interview in April 2015, seven weeks after his home had been raided by police, the former head of the British army told detectives: “I am absolutely astonished, amazed and bemused. I find it incredible that anybody should believe that someone of my career standing, integrity, should be capable of any of these things, including things like torture. Unbelievable.”

At one stage, Bramall was asked if he could swim as Beech had alleged some abuse had happened at “pool parties”. “I landed at Normandy and I jolly nearly had to swim,” he said.

Another of those accused, 96-year-old Gen Sir Hugh Beach, dismissed claims he was part of a paedophile ring as “beyond grotesque”. Giving evidence via video link, the second World War veteran described the allegations as “inconceivable”.

The trial heard how Beech had sent false information to the police from an encrypted email account he had set up for a fictitious man called “Fred”, whom he had named as being present when he was abused.

He initially lied to investigators and sought to frame his teenage son for the crime, pleading not guilty to the indecent image offences before switching his plea and accepting he was responsible. Beech concealed some of the material, which included 28 child abuse images of the most serious category, on a secret calculator app on his iPad.

The divorced father of one fled to Sweden while awaiting trial over the child abuse images, going on the run for two months before being captured by police after a European arrest warrant was issued.

Assuming different identities, Beech hatched plans to set up a B&B in a remote hamlet in the far north of Sweden, which he left owing debts worth thousands of pounds to tradesmen who had helped renovate his cabin.

The Guardian has learned that Beech gave talks to children as young as five about the dangers of abuse on behalf of the NSPCC. He volunteered for the charity from November 2012 until July 2015, delivering assemblies and workshops to young children. Beech spoke to key stage 1 and 2 pupils at 33 primary schools in Herefordshire as part of the NSPCC’s Speak Out Stay Safe scheme.

The NSPCC is believed to have been aware of Beech’s involvement in Operation Midland, which launched in November 2014, but he stopped volunteering in schools for the charity before the criminal investigation was launched into his false claims.

Beech, who enjoyed a long career as an NHS manager, was a governor of two schools and working as an inspector at the health watchdog, the Care Quality Commission, when Northumbria police – appointed as an outside force – began investigating him over his false claims after Operation Midland was closed in March 2016.

Lady Brittan and Bramall later received compensation from the Met after the force admitted raids on their homes should never have taken place. Proctor is still pursuing legal action.

A retired judge, Sir Richard Henriques, who was commissioned to review the investigation, criticised the Met in a report published in November 2016.

Beech was charged with perverting the course of justice and fraud in early July last year – weeks before he failed to turn up to stand trial over the child abuse image offences. – Guardian News and Media 2019