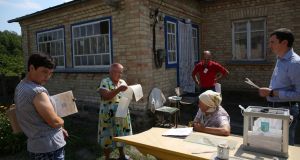 Members of the Ukrainian electoral commission talk to a voter before she casts her vote in a mobile ballot box during parliamentary elections, in the village of Velyki Dmytrovychi, near Kiev, Ukraine. Photograph: EPA/Tatyana Zenkovich

His Servant of the People party took 43.9 per cent of votes, ahead of the Kremlin-friendly Opposition Platform on 11.5 per cent and three pro-western parties that also cleared the 5 per cent threshold to enter parliament, according to a poll published after voting ended.

The data only covered voting on party lists, according to which 225 of 424 seats in parliament will be filled, with the rest going to the winners in individual constituencies where influential local figures – often connected to powerful businessmen with major interests in the city or region – usually flourish.

Nevertheless, Servant of the People said it expected to win all single-mandate districts in the capital, Kiev, and to fare strongly across the country of 42 million people, by building on the momentum of Mr Zelenskiy’s election triumph in April.

If it fails to secure a majority, the party’s preferred coalition partner is another new, reformist, pro-western party founded by one of Ukraine’s most popular performers, Holos (Voice), led by rock singer Svyatoslav Vakarchuk.

The exit poll gave Holos 6.3 per cent of votes, behind the Fatherland party of ex-prime minister Yulia Tymoshenko on 7.6 per cent and European Solidarity led by former president Petro Poroshenko on 8.9 per cent.

“We will invite Mr Vakarchuk for talks. As for whether he could become prime minister – that’s a question for him because it’s a big responsibility,” Mr Zelenskiy said on Sunday evening.

He insisted that the new premier should not be a politician but “an economic guru with authority in Ukraine and in the West”.

Earlier, after voting in Kiev, Mr Zelenskiy (41) said the government should be led by “an absolutely independent person, who has never been a prime minister or speaker of parliament or leader of any party. To be honest, I’m already holding consultations on this...with a few people.”

“I would like only new faces,” to be in any governing alliance, he added. “We don’t envisage anyone from the old guard in the coalition.”

Mr Vakarchuk, who has a degree in theoretical physics but no noted economic expertise, said before the ballot that Holos was open to coalition talks with all pro-western parties that want to strip wealthy oligarchs of their political influence.

Servant of the People says its priorities include a new law on illegal enrichment by officials, the removal of deputies’ immunity from prosecution, a law on presidential impeachment and electoral reform.

Both Servant of the People and Holos also want to strengthen Ukraine’s beleaguered anti-corruption agencies and relaunch reform of its criminal justice system, to entrench the rule of law and encourage foreign investment.

Mr Zelenskiy also wants to end a war with Russian-led separatists in eastern Ukraine that has killed more than 13,000 people, but not at the expense of his country’s integration with the West.