Brexit: Hammond and Gauke to quit cabinet before Johnson takes over 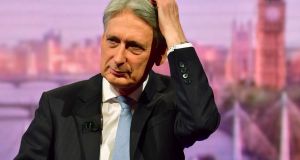 Chancellor of the exchequer Philip Hammond said he would be a loyal supporter of the Conservative government if it pursued a deal with Brussels. Photograph: Jeff Overs/AFP/Getty

Two senior ministers have said they will resign before Boris Johnson becomes prime minister on Wednesday if, as expected, he wins the Conservative leadership on Tuesday. Chancellor of the exchequer Philip Hammond said he could not serve in a cabinet committed to taking Britain out of the European Union without a deal.

“I understand that his conditions for serving in his government would include accepting a no-deal exit on October 31st. That is not something I could ever sign up to. It’s very important that a prime minister is able to have a chancellor who is closely aligned with him in terms of policy, and I therefore intend to resign to Theresa May before she goes to the palace to tender her own resignation on Wednesday,” he told the BBC.

Justice secretary David Gauke said on Sunday that he too will resign before Mr Johnson enters Downing Street, and other ministers opposed to a no-deal Brexit are expected to follow suit. Voting in the Conservative leadership contest ends on Monday and Mr Johnson is expected to be announced as the winner on Tuesday morning. Mrs May will take her final prime minister’s questions in the House of Commons on Wednesday before tendering her resignation to Queen Elizabeth.

Mr Hammond said he would campaign from the backbenches against a no-deal Brexit but he said he would be a loyal supporter of the Conservative government if it pursued a deal with Brussels. He noted, however, that Tánaiste Simon Coveney on Sunday restated the EU’s position that the withdrawal agreement cannot be reopened.

“Although Simon Coveney made clear the EU’s not going to change its position on the withdrawal agreement, there’s a lot more flexibility on the future relationship, and although parliament will have the same arithmetic as it did under Theresa May, the fact of a new leader, the fact of the leader being someone who has a mandate from the party membership, being someone who is trusted by the Brexiteers, may make it easier for him to find a way through, and I very much hope he does and he will have any support that I can give him so long as he is genuinely seeking a negotiated deal,” he said.

Mr Johnson has said the withdrawal agreement is dead and he last week ruled out accepting it even if the EU agreed to make changes to the Northern Irish backstop such as adding a time limit or a unilateral exit clause.

Former Conservative leader Iain Duncan Smith, who is supporting Mr Johnson, said Britain had been “taken for a ride” by hard-nosed EU negotiators.

“They do it all the time with other countries, they treat us like a third world – like a third country – and then they say, right, that’s it, this is our position. So they’ve held their position on this but they would say that. They’re not going to negotiate in public, they’re going to say they won’t engage, but I am certain that they will engage to discuss what the alternatives are, otherwise they want us to leave with no deal, in which case that’s very clear,” he told the BBC.