Protesters in Tehran have demanded the resignation of Iran's leaders after the Iranian military confirmed that they mistakenly shot down a Ukrainian airliner, killing all 176 aboard. Video: Reuters 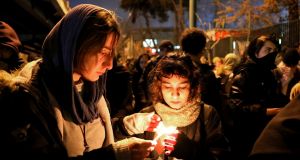 People gather for a candlelight vigil to remember the victims of the Ukraine plane crash, at the gate of Amri Kabir University in Tehran on Saturday. Photograph: Ebrahim Noroozi/AP

Protesters piled pressure on Iran’s leadership on Sunday with demands for top authorities to quit after the Iranian military admitted it had mistakenly shot down a Ukrainian airliner at a time when it had feared US strikes.

Protests began on Saturday, according to state-affiliated media, shortly after the Iranian military apologised for mistakenly bringing down the Ukrainian plane on Wednesday, killing all 176 aboard.

Riot police fired teargas at thousands of protesters in the capital on Saturday, where many had chanted “Death to the dictator”, directing their anger at the Islamic Republic’s supreme leader Ayatollah Ali Khamenei.

“Apologise and resign,” Iran’s moderate Etemad daily wrote in a banner headline on Sunday, saying the “people’s demand” was for those responsible for mishandling the plane crisis to quit.

Protests in Iran have followed a a US drone strike in Iraq on January 3rd, which killed prominent Iranian commander Qassem Suleimani. Tehran responded with missile strikes on US targets in Iraq.

No US soldiers were killed, but in the tense hours after that, the Ukrainian Boeing 737 was cleared to take off from Tehran airport and brought down by a missile fired in error when Iranian forces were on alert for US reprisals .

In response to Suleimani’s death, Iran had fired ballistic missiles at two bases in Iraq that house US forces, causing no casualties.

On Sunday, four members of Iraq’s military were wounded in a further rocket attack targeting an air base just north of Baghdad where American trainers are present, Iraqi security officials said; no group has yet claimed responsibility for the attack.

Recent heightened tensions between the US and Iran were sparked last month when a rocket attack killed an American contractor at a base in Iraq. The US has blamed that attack and others on Iran-backed militias.

Many of those on board the Ukranian plane were Iranians with dual citizenship, while 57 were holders of Canadian passports.

Iran’s president said it was a “disastrous mistake” and apologised. But a top Revolutionary Guards commander added to public fury when he said he had told the authorities on the same day as the crash that an Iranian missile had struck the plane.

The Guards’ top commander, Hossein Salami, said “we are more upset than anyone over the incident”, state media reported.

But others said Iran’s enemies, a term usually used to refer to the US and its allies, were exploiting the incident.

“Iran’s enemies want to take revenge on the Guards for a military mistake,” said Ali Shirazi, the ayatollah’s representative to the Quds Force, state media reported.

After Saturday’s protests, US president Donald Trump said on Twitter: “There can not be another massacre of peaceful protesters, nor an internet shutdown. The world is watching.”

Canadian prime minister Justin Trudeau said: “What Iran has admitted to is very serious. Shooting down a civilian aircraft is horrific. Iran must take full responsibility.

“Canada will not rest until we get the accountability, justice, and closure that the families deserve.”

The UK ambassador to Iran was summoned on Sunday to explain what he was doing near the site of an anti-government protest, Iran’s foreign ministry has said.

Rob Macaire was called to the ministry of foreign affairs after police arrested him on Saturday as demonstrations broke out in Tehran.

Tehran said it had summoned Mr Macaire to justify his “illegal and inappropriate presence” at the protest, despite the ambassador denying he had taken part. Meanwhile a small group of pro-regime protesters gathered outside the UK embassy calling for its closure.

The latest move has threatened to further escalate the tensions between London and Tehran after the UK foreign secretary Dominic Raab denounced Mr Macaire’s detention as a “flagrant violation” of international law.

Mr Macaire, who was released shortly after Iranian diplomatic officials learned of his arrest, tweeted that he had attended what was advertised as a vigil, left after five minutes as it began to turn into a protest, and was detained 30 minutes later as he made his way back to the embassy.

He said it was normal to wish to pay respects, adding that some of the 176 who died were British. “Arresting diplomats is of course illegal, in all countries,” he tweeted.

Iran’s deputy foreign minister said on Sunday that Mr Macaire had been “arrested as [an] unknown foreigner in an illegal gathering”.

“When police informed me a man’s [been]arrested who claims to be UK amb[assador], I said IMPOSSIBLE!” tweeted Seyed Abbas Araghchi. “Only after my phone conversation w[ith] him I identified, out of big surprise, that it’s him. 15 mins later he was free.”

The semi-official Tasnim news agency, which is linked to Iran’s Revolutionary Guards, said Mr Macaire had been arrested for “organising suspicious movements and protests in front of Amirkabir University but released after hours”.

The report claimed that an informed police source said he was using “a shop which is located in front of the main gate of Amirkabir University as the envoy’s secret place for co-ordination”.

Mr Raab said: “The arrest of our ambassador in Tehran without grounds or explanation is a flagrant violation of international law. The Iranian government is at a crossroads moment. It can continue its march towards pariah status with all the political and economic isolation that entails, or take steps to de-escalate tensions and engage in a diplomacy.

Mr Macaire was last week called in by the Iranian foreign ministry for an official dressing down over the way in which senior British politicians including Boris Johnson and Raab had appeared to welcomed the death of Suleimani. –Reuters/Guardian/PA