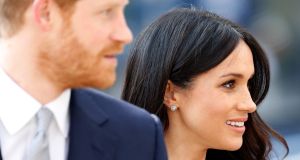 Meghan Markle returned to Canada after three days in the UK; it is understood Prince Harry will follow this week. File photgraph: Max Mumby/Indigo/Getty Images

Senior royal officials and UK and Canadian government representatives continued urgent talks on Saturday, over the future of the Duke and Duchess of Sussex, as palace insiders denied reports the couple had been “driven out”.

The Queen, Prince of Wales and Duke of Cambridge want a workable plan as soon as possible to contain the crisis and prevent it festering.

Harry and Meghan also hope talks can be concluded “sooner rather than later”, according to a source. “It’s in everyone’s interest this can be figured out, and figured out quickly, but not at the expense of the outcome,” the source said.

The couple made an announcement on Wednesday that they intended to “step back” from being front-line royals, split their time between the UK and North America, and work towards becoming “financially independent”.

The country’s most senior civil servant, cabinet secretary Sir Mark Sedwill, is reportedly one of the figures around the negotiating table, along with aides from Buckingham Palace, Clarence House and Kensington Palace. Officials from the Canadian government are also participating, and all have been tasked with finding a workable solution “at pace”.

Buckingham Palace is keen for a scoped-out plan as early as this week, as it tries to curtail a developing narrative of family rift, following reports, including from ITV’s Tom Bradby, who is considered a friend of the Sussexes, of a “toxic” relationship between them and the rest of the family.

Meghan flew back to Canada on Thursday, the day after the couple dropped their statement on Instagram and their new website Sussexroyal.com, blindsiding Buckingham Palace.

She had spent just three days in the UK. The fact that the couple’s two dogs are also in Canada has been interpreted as possible indication they intend to stay there for some time in the immediate future.

Harry remained at Frogmore Cottage, their Windsor residence. He has an official engagement at Buckingham Palace on Thursday, carrying out the draw for next year’s Rugby League World Cup. It is thought the royal family want some workable deal on the table before he makes his first public appearance since the crisis broke.

There is speculation he may then fly out to Canada to join his wife and eight-month-old son Archie.

Palace officials have shed no light on future official engagements for the couple. One insider would only say: “We’re operating under business as usual, and we’ve got a programme and a schedule.”

The key issue is clearly funding. Aides stress that funding will not be the “driving force” behind the negotiations; neither used as a beating stick nor an incentive to push the couple in any preferred direction.

It is felt imperative the couple feel they have been given every opportunity to explore their revolutionary idea of becoming “hybrid” royals in new “progressive” roles, without being stymied by cost implications.

The last thing the palace wants are negative briefings from the Sussexes’ camp that they are being forced into something they do not want.

The couple say they receive 5 per cent of their official expenses directly from the Sovereign Grant, though this excludes the high cost of their armed police protection and overseas official travel. The majority of their living expenses are met by Charles, through his income from the Duchy of Cornwall.

According to a poll for the Daily Mail, almost three-quarters (72 per cent ) of people believed the couple should be allowed to leave for Canada, with just 16 per cent believing the Queen should ask them to stay. But more people (76 per cent) believed that if they step back as senior royals they should sacrifice their Metropolitan police protection, and 73 per cent said the same for tax-payer funded security measures.

The fact that Harry defied the Queen’s wishes not to go public while talks within the royals were at the earliest stage, leaving family members feeling “disappointed” and “hurt”, has not played well with the public. Almost two-thirds, (60 per cent) believed the Queen had been treated “shoddily” by the couple, the poll showed.

How the couple intend to become financially independent without facing accusations of cashing in on their royal titles is far from clear. As so-called international influencers, there will be commercial opportunities aplenty, though if they can monetise these for personal rather than charitable gain remains the question.

Before their announcement, Meghan had already reportedly agreed to a Disney voiceover in return for a donation to the charity Elephants Without Borders. Harry has collaborated with chat show host Oprah Winfrey on a documentary about mental health, which will be broadcast on Apple+ this year, but is not thought to have been paid any fee.

The couple has already trademarked more than 100 items for their Sussex Royal brand, but this is thought to be connected with their charitable foundation. They are understood to have turned for advice to the former US presidential couple, Barack and Michelle Obama, who have successfully set up their own foundation after leaving the White House. – Guardian