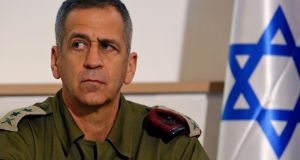 Iran has dismissed comments from Israel’s top general indicating that the Israel Defence Forces (IDF) are drawing up plans for military action to prevent Iran acquiring a nuclear bomb.

The Iranian president’s chief of staff, Mahmoud Vaezi, said that Israel does not have an attack plan, and described the remarks by Israel army chief of staff Lt Gen Aviv Kochavi as “pure psychological warfare”. He went on to say, however, that Iran would defend itself against any Israeli attack.

Mr Vaezi said that Israel needed to come to terms with the fact that US president Donald Trump’s term in office has come to an end, and that Washington’s decisions were “no longer being made in Israel”.

In a rare policy statement by a leading general, Gen Kochavi spoke out against a return to the nuclear agreement with Iran.

“A return to the deal, even with some improvements, is bad operationally and it is bad strategically.” He said allowing Iran to proceed with a nuclear programme would be “an unacceptable threat and will lead to nuclear proliferation across the region”.

Gen Kochavi warned that Iran, due to its improved centrifuges and growing stockpile of enriched uranium, could be “months, maybe even weeks” away from a bomb. He said that Israel’s military would be prepared to attack on its own if needed.

“I instructed the army to prepare a number of operational plans in addition to the existing ones,” he said. “We are taking care of these plans and will develop them during the coming year.”

Israeli fighter planes destroyed an Iraqi nuclear reactor in 1981 and a similar installation in Syria in 2007.

The 2015 deal put curbs on Iran’s nuclear programme in exchange for the easing of crippling economic sanctions. Israel strongly opposed the deal, saying it did not include sufficient safeguards to prevent Teheran from developing a nuclear weapon. It welcomed the Trump administration’s withdrawal from the agreement in 2018.

President Joe Biden has said he will seek to revive the deal, with some changes.

Gen Kochavi’s sentiments put him on the same page as prime minister Binyamin Netanyahu, who has spoken out against Washington returning to the nuclear deal with Iran.

However, a number of Israeli defence officials criticised the fact that the general spoke publicly, arguing that it would have been better if he had expressed his opinion to the Americans behind closed doors, especially at such a sensitive time when the Biden administration is formulating a new policy towards Teheran.

“It’s better to hold a quiet conversation inside the room,” he said. “I would absolutely not recommend an adversarial policy vis-a-vis the Americans in the media.”