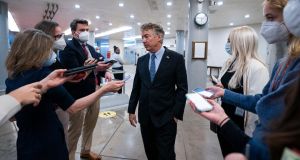 Republican senator from Kentucky Rand Paul argued that holding an impeachment trial after a president is no longer in office is not constitutional. Photograph: EPA/Jim Lo Scalzo

The prospect that Donald Trump will be convicted in his impeachment trial receded on Tuesday after 45 Republicans objected to the constitutionality of the trial.

Kentucky senator Rand Paul forced a vote on the senate floor about the process of the trial, shortly after the senators were sworn in, arguing that holding an impeachment trial after a president is no longer in office is not constitutional.

Though the vote was simply procedural, it provided a window into the thinking of Republican senators who will decide next month whether to convict the former president on one charge of incitement to insurrection.

A two-thirds majority is needed to convict Mr Trump, which means that 17 Republicans would need to side with the 50 Democratic votes to find him guilty.

Though Tuesday’s vote does not affect the substance or timing of the trial itself, which will begin on February 9th, it strongly suggests that there will be insufficient votes to convict Mr Trump. The former president was impeached on January 13th for his role in inciting the Capitol insurrection a week earlier, and is the first former president to face a trial after he has left office.

Introducing his point of order, Mr Paul argued that the impeachment of a former president “violates the constitution”, as Mr Trump is now a private citizen. He also noted that the presiding officer is not the chief justice, which is required for presidential impeachments. Instead, Senator Patrick Leahy, the president pro tempore, is presiding over the trial.

But senate majority leader Chuck Schumer rejected those arguments. “The theory that the impeachment of a former official is unconstitutional is flat out wrong by every frame of analysis,” he said ahead of the vote. “It’s been completely debunked by constitutional scholars from all across the political spectrum.”

He argued that this would give a “constitutional get-out-of-jail free card” for any president who wanted to commit an impeachable event in the final weeks of office.

Following the vote, Mr Leahy adjourned the senate impeachment trial until February 9th to allow both sides to prepare their cases. But the outcome of the latest vote makes it highly unlikely that Mr Trump will be convicted. Before the vote, lawyer Jonathan Turley, who was one of Mr Trump’s witnesses during his first impeachment trial, addressed the Republican senators over lunch. The respected law academic has argued that his second impeachment trial is unconstitutional.

Meanwhile, Janet Yellen has been sworn in as the first female treasury secretary, as president Joe Biden continued to fill key positions in his administration.

Following her confirmation by the Senate on Monday night, the former federal reserve chair was administered the oath of office, alongside members of her family, by vice-president Kamala Harris in the grounds of the White House. Ms Harris later received her second dose of the Moderna coronavirus vaccine.

Mr Biden’s nominee for secretary of state, Antony Blinken, was also confirmed by the Senate on Tuesday. A veteran of the Obama administration, Mr Blinken is expected to repair relations with the US’s traditional allies, particularly in Europe.

According to a read-out from the White House, Mr Biden raised the poisoning of Aleksey Navalny, the extension of the New START nuclear programme, as well as Ukraine, Afghanistan and interference in last year’s election.