Kremlin expects no quick ‘reset’ with US despite arms pact extension 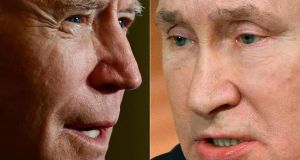 The Kremlin has said there is no prospect of a swift thaw in relations with Washington, while welcoming a first phone call between Russian president Vladimir Putin and his new US counterpart Joe Biden, in which they confirmed the extension of an imperilled arms control treaty.

“Of course, there are no conditions yet for a ‘reset’. But there is a very important understanding and agreement on the need to extend the New Start Treaty,” Kremlin spokesman Dmitry Peskov said on Wednesday.

“It is enough that yesterday the presidents, having noted the existence of rather serious disagreements, nevertheless stressed the need to continue dialogue,” he added of a 35-minute call that he described as “business-like and frank”.

“President Biden reaffirmed the United States’ firm support for Ukraine’s sovereignty. He also raised other matters of concern, including the SolarWinds hack [of US federal agencies], reports of Russia placing bounties on United States soldiers in Afghanistan, interference in the 2020 United States election, and the poisoning of [Russian opposition figure] Alexei Navalny, ” the White House said in a statement.

“President Biden made clear that the United States will act firmly in defence of its national interests in response to actions by Russia that harm us or our allies. The two presidents agreed to maintain transparent and consistent communication going forward.”

The New Start treaty – a 2010 pact that limits the number of missiles, bombers and nuclear warheads that the US and Russia can deploy – was due to expire next week.

“No doubt it is a step in the right direction,” Mr Putin said on Wednesday, as Russia’s parliament quickly ratified the five-year extension to the accord.

He also noted growing “contradictions” in the world and the potential threat of conflict, warning that “the situation can develop unpredictably and uncontrollably if nothing is done to prevent it”.

Russia hoped relations with Washington would improve under Mr Trump, but despite his calls for a rapprochement with Moscow, ties continued to deteriorate in areas including arms control; in 2019, both countries withdrew from the 1987 Intermediate-Range Nuclear Forces Treaty, and subsequently left the Open Skies Treaty that permitted surveillance flights over military facilities to help build trust.

Russia’s deputy foreign minister Sergei Ryabkov said the New Start pact had been extended “on our terms, for five years without preconditions or additions”.

“We intend to use this time to launch in-depth, intensive negotiations with the United States on future arms control . . . We hope that, despite the difficulties and generally not very favourable background of our relations with Washington, it will be possible to move forward in this area,” he added.