Dutch police clashed with protesters demonstrating against coronavirus rules across the Netherlands on Sunday. More than 240 arrests were made after rioters looted stores, set fires and fought with police. Video: Reuters 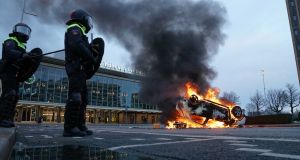 Police watch a car that has been set on fire on 18 Septemberplein in Eindhoven, the Netherlands, on Sunday. Photograph: Photograph: Rob Engelaar/EPA

The Netherlands’ caretaker prime minister, Mark Rutte, has ruled out calling in the army to impose order after two nights of violent weekend rioting by mobs describing themselves as anti-lockdown and anti-curfew protesters across the country.

Riot police used water cannon, dogs and horses in Amsterdam and 10 other cities to disperse gangs who burned down a temporary coronavirus test centre in one case on Saturday night, and pelted rocks and stones at a hospital treating Covid-19 patients on Sunday evening.

The rioting was apparently prompted by the introduction of the first overnight curfew since the second World War in an attempt to prevent a third wave of the virus fuelled by more infectious new strains. However, it was in fact the second weekend in a row of running battles with police.

In an angry response as the country cleared up on Monday, Mr Rutte rejected the idea that the rioters were genuine protesters, commenting: “This is not on. Anyone normal will look at these horrific scenes and ask – what came over these people?

“We’re not taking these measures for fun. We are taking them because this pandemic is forcing us to restrict our freedoms. So this has nothing at all to with protesting. It is criminal violence – and that is how we intend to deal with it.”

Given the extent of the violence, in which 240 people were arrested and journalists were attacked in some instances, police are trying to establish whether the mayhem was co-ordinated and is likely to continue.

One police union said it was the worst sustained violence it had encountered in 40 years.

The focal point on Saturday night was the staunchly Protestant village of Urk where a coronavirus test centre that had been filmed earlier in the day for television was set alight shortly after the curfew began at 9pm and burned to the ground.

As it burned, “protesters” in cars and on mopeds – many of them youngsters – honked their horns in scenes reminiscent of previous anti-lockdown rioting there in November and December.

There was also trouble in Rotterdam and Amersfoort and in the Limburg town of Stein, where police were pelted with fireworks by groups refusing to disperse.

On Sunday evening, the trouble was far more serious. As 9 pm sounded, gangs of youngsters began attacking police in Amsterdam, The Hague, Arnhem, Oosterhout, Breda, Venlo, Tilburg, Helmond, and Enschede, where the hospital was attacked and needed extra security.

In central Eindhoven, where vehicles were burned and the vandalism and looting was particularly extensive, mayor John Jorritsma declared: “My city is crying. If things carry on like this we’ll be heading for civil war.”

There have so far been 13,540 deaths in the Netherlands from coronavirus.