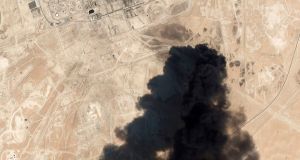 Iran has dismissed US accusations that it was responsible for a swarm of explosive drone attacks on the world’s largest petroleum processing facility in Saudi Arabia that disrupted more than half of the kingdom’s oil output and could jolt global supplies.

Yemen’s Iran-aligned Houthi rebel group claimed responsibility for launching waves of drones at state-owned Saudi Aramco facilities early on Saturday morning. But the US secretary of state, Mike Pompeo, said there was no evidence the drones were launched in Yemen and accused Iran of “an unprecedented attack on the world’s energy supply”.

Iranian officials rejected those claims on Sunday and warned that US military assets in the region were within range of its missiles. “Having failed at ‘max pressure’, [Pompeo is] turning to ‘max deceit’,” the Iranian foreign minister, Javad Zarif, wrote on Twitter.

“Everybody should know that all American bases and their aircraft carriers in a distance of up to 2,000 kilometres around Iran are within the range of our missiles,” the head of the Revolutionary Guards Corps’ aerospace force, Amirali Hajizadeh, was quoted as saying by the semi-official Tasnim news agency.

Saudi Arabia’s oil fields and pipelines have been targeted by rebels over the past year but never on such a scale and causing such disruption. Aramco said the attacks would cut output by 5.7 million barrels per day, more than 5 per cent of global crude supply.

A Saudi-led military coalition has been fighting Houthi forces in Yemen for the past four years in a war viewed partly as a proxy for the wider battle for regional supremacy between Saudi Arabia and Iran. Both the Houthis and Iran deny allegations by Saudi and western leaders that Tehran is funding, arming and training the rebel group.

The attacks are the most damaging and deepest within Saudi territory that have yet been claimed by the Yemeni rebels, and demonstrate the vulnerability of the world’s fossil fuel supply to attacks by low-tech, relatively cheap weapons.

Saudi Aramco is preparing for what Saudi Arabia hopes will be the world’s largest-ever public listing and the fuel for crown prince Mohammad bin Salman’s ambitious plan to transform the Saudi economy by 2030.

But achieving the $2 trillion evaluation it hopes for will require the market to shrug off concerns about weakening long-term demand for the fossil fuel, as well as the ongoing US-China trade war and the prospect of a global economic slowdown.

“Abqaiq is the nerve centre of the Saudi energy system. Even if exports resume in the next 24 to 48 hours, the image of invulnerability has been altered,” said Helima Croft, global head of commodity strategy at RBC Capital Markets.

Some Iraqi media outlets claimed the attack originated from their country, where Iran-backed paramilitary groups are growing in capability. However, a spokesman for Iraq’s ministry of defence dismissed this on Sunday. “Iraq calls on all parties to stop these attacks which cause great losses of life & facilities,” Yehia Rasool wrote on Twitter.

Robert McNally, of the US-based Rapidan Energy Group, said: “Abqaiq is perhaps the most critical facility in the world for oil supply. Oil prices will jump on this. If disruption to production is prolonged, a Strategic Petrol Reserves release from International Energy Agency [IEA] members seems both likely and sensible. If anything, the risk of tit-for-tat regional escalation, which pushes oil prices even higher, has just gone up significantly.”

The IEA said it was “monitoring the situation closely”. A spokesman added: “We are in contact with Saudi authorities as well as major producer and consumer nations. For now, markets are well supplied.”– Guardian