Robert Mugabe honoured as an icon, leader and intellectual at state funeral 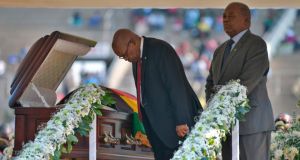 Former South African president Jacob Zuma (left) bows as he stands by the casket of late former Zimbabwean president Robert Mugabe during a farewell ceremony held for family and heads of state at the National Sports Stadium in Harare on Saturday. Photograph: Tony Karumba/AFP/Getty

Zimbabwe’s founder Robert Mugabe was honoured as an icon, principled leader and African intellectual giant at a state funeral on Saturday, after a week of disputes over his burial threatened to embarrass president Emmerson Mnangagwa.

Mugabe led Zimbabwe for 37 years, from independence until he was ousted by the army in November 2017, by which time he was viewed by many at home and abroad as a power-obsessed autocrat who unleashed death squads, rigged elections and ruined the economy to keep control.

He died in a Singapore hospital on September 6th aged 95, far away from a country he left polarised by a raging political rivalry between its two largest political parties, ZANU-PF and the opposition MDC.

His remains will be interred in a mausoleum at the National Heroes Acre in the capital Harare in about 30 days, his nephew said on Friday, contradicting earlier comments that a burial would be held on Sunday.

On Saturday, Mr Mnangagwa walked behind the casket carrying Mugabe’s body as it was wheeled into the centre of Harare’s National Sports Stadium and placed on a podium decorated with flowers so that heads of state could say their farewells. Senior army generals and Mugabe’s wife and children followed, as a brass band played.

The 60,000 seater stadium was only half-filled.

In a tribute to his predecessor, Mr Mnangagwa said Mugabe stood in defence of Africans. He urged the West to remove sanctions that were imposed during Mugabe’s rule.

“We who remain shall continue to hear his rich, brave, defiant and inspiring voice . . . encouraging and warning us to be vigilant and astute,” Mnangagwa said in a speech.

“A giant tree of Africa has fallen. Today Africa weeps.”

Mr Mnangagwa and the ruling ZANU-PF party wanted Mugabe buried at the national shrine to heroes of the 15-year liberation war against white minority rule. But some relatives, expressing bitterness at the way former comrades ousted Mugabe, had pushed for him to be buried in his home village.

Walter Chidhakwa, who spoke on behalf of Mugabe’s family, said Mugabe was an icon who was determined and unflinching in pursuing policies like land reform and later the black economic empowerment programme.

Mugabe left behind a country wrecked by hyperinflation, dollarisation and deeply entrenched corruption.

But many Zimbabweans also remember Mugabe as their country’s liberator from white minority rule and for broadening people’s access to education and land.

South African president Cyril Ramaphosa was booed by the crowd in the stadium after a wave of deadly riots and xenophobic attacks in South Africa earlier this month that triggered international anger. The attacks mainly targeted shops owned by African migrants.

The master of ceremony was forced to appeal to the crowd to give Ramaphosa a chance to speak.

“I stand before you as a fellow African to express my regret and to apologise for what has happened in our country,” Mr Ramaphosa said, to cheering from the crowd.

Other heads of state who attended Saturday’s funeral included long-ruling leaders from Equatorial Guinea and Congo while China, Russia and Cuba, which supported Zimbabwe’s liberation movements that fought white minority rule, were represented by officials.

Prominent officials from Western countries, which were critical of Mugabe’s rule, did not feature in the official funeral programme.

Mr Mnangagwa led heads of state in viewing Mugabe’s body, which was followed by a military 21-gun salute to honour Mugabe.

Banners at the stadium where Mugabe’s body lay in state read “Hamba kahle, Gushungo,” (go well, Gushungo)”, a reference to his clan name, and “Go well our revolutionary icon”.

Cleo Mapuranga, a caterer, told Reuters that Mugabe fought to give land and economic freedom to blacks and provided non-racial education.

“Now, people are suffering. No one is controlling the prices in the shops. Our finance minister is trying to implement first-world policies which don’t work in third-world countries.”

Mugabe’s death has made some Zimbabweans question what Mr Mnangagwa has achieved in his two years in power.

His government has taken steps to cut the budget deficit, remove subsidies on fuel and power and repeal laws curbing public and media freedoms, but those reforms and austerity measures have compounded ordinary people’s hardships. – Reuters