Syria struggles to recover as it fights an economic war 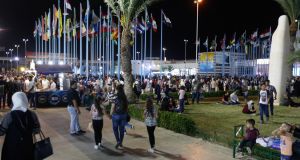 This year’s Damascus International Fair – a commercial exhibition that resumed in 2017 after a five-year hiatus due to the Syrian civil war – was a grand social success. More than 1 million Syrians flocked to the fairground and toured the exhibits of firms from 30 countries during the 10-day event, which finished on Friday, September 6th.

While local and foreign businessmen networked and signed deals at the event, Syria remains trapped in a sanctions straitjacket that prevents reconstruction and trade. Syrians had expected rapid economic revitalisation now that the situation has stabilised in Syria’s main cities and surrounding countryside.

Fighting, destruction and dislocation have taken a terrible toll on the country and its people. Syria’s main oil fields are occupied by US-backed Kurdish forces, its agriculture and manufacturing sectors have been devastated, and tourism is non-existent.

While the grain harvest has been good thanks to plentiful rain last winter, Syria will have to buy half of the grain required from abroad without raising the price of bread, a staple for every household. Essentials such as thyroid, heart, and cancer medicine, as well as consumer goods, are smuggled and sold at high prices. Bartering has made a comeback.

Sources in Hama say the economic situation in that city, Aleppo and Homs is better than in Damascus because they trade with the countryside and have re- vived small food and fabric industries.

Damascus’s suburbs and countryside have been devastated. Meanwhile, although the area was initially stable after coming under government control in mid-2018, armed rebels have regrouped in Deraa in the south. Having agreed with the government’s Russian allies to halt hostilities, many have resumed attacks on the army and are receiving aid from outside Syria. Refugees and displaced persons who resettled in Deraa are leaving.

A businessman involved in importing and exporting reports that the US is tightening the punitive sanctions regime.

Economic consultant Dr Nabil Sukkar says that while the situation is stable he is not optimistic for the future. Over the past two years the government has been drawing up “a reconstruction plan for 2030 for the whole of Syria, not only territory under government control. It’s a 10-year plan in two stages, although there are few details so far,” he says.

He asks: “Will it be a realistic plan or a very ambitious plan which is not implementable, beyond our financial means?” Nevertheless, some firms have “set up in Lebanon until the outcome [of the economic war] is clear in Syria. Lebanon will benefit from Syrian reconstruction.

“The Chinese [who mounted a large exhibition in the Damascus fair] have rented a big property in Lebanon’s Bekaa valley close to Damascus. They also have a base in north Lebanon at the port of Tripoli close to Homs.”

Over the past 8½ years Syria’s currency has fallen in value from 47 to more than 600 to the dollar. Dr Sukkar says that “salaries are down, prices are up” for most Syrians. However, he also states that “cafes are mushrooming in Damascus”, adding: “Where does the money come from?”

During and after conflict, disparities in wealth grow apace. Corruption is also a serious issue for both Syrian and foreign business in the country. New shops are going for $10,000 a metre in the complex attached to the luxurious Four Seasons Hotel in central Damascus. “All have been sold,” states a merchant.

While their country struggles to overcome sanctions, Syrians have a secret weapon against deprivation. Families of all classes survive by producing “mouneh” – pickled, preserved and dried vegetables and fruit. They pickle olives, cucumbers, small eggplants, carrots, peppers, turnips and cabbage, as well as dry mint, figs, grapes, mallow (mulukhia) leaves, and okra. They also make jam and cheese.

Although in despair over sanctions preventing international assistance for the preservation of Syria’s ancient heritage sites, former director of antiquities Dr Maamoun Abdulkarim remains upbeat due to mouneh.

“Summer is the mother of poor Syrian families because the climate is fantastic for the production of vegetables and fruit” which are cheap in season. “Summer is long, so they don’t need heat. Electricity, water and bread are cheap. Education is free. We keep hope in our heart despite all the difficulties and look to small things.”