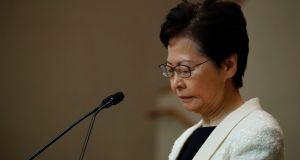 Hong Kong chief executive Carrie Lam: “For a chief executive to have caused this huge havoc to Hong Kong is unforgivable,” she was heard to say in the leaked recording. Photograph: Jae C Hong/AP

Carrie Lam told reporters at a press conference on Tuesday that the comments were made at a lunch with industry and social leaders and that it was “unacceptable” that they had been shared with the press. She insisted she had “never tendered any resignation” to Beijing.

“For a chief executive to have caused this huge havoc to Hong Kong is unforgivable,” Ms Lam was heard saying in a recording published by Reuters. “If I have a choice, the first thing is to quit, having made a deep apology, to step down.” She added in the recording that her room for manoeuvre was limited because the issue had been elevated to a “national level” in Beijing and that the US-China trade war had complicated matters.

Hong Kong has been wracked by demonstrations for more than 12 weeks after Ms Lam tried to pass a law that would have allowed criminal suspects to be extradited to mainland China for the first time. The Bill has been suspended but the protests have intensified, with increasing calls for greater democratic rights that have plunged the territory into its worst political crisis since its handover from Britain to China in 1997. More than 1,100 protesters have been arrested since the start of the demonstrations in June.

On Monday, tens of thousands of high school and university students boycotted classes and riot police were deployed at subway stations in the city. The student strike continued on Tuesday, with some students holding separate assemblies in schools to discuss the protests.

Ms Lam and her deputy have both said in recent days that the government had not ruled out using a colonial-era law that would give the government sweeping powers that would make it easier to make arrests, detain individuals and censor the spread of information.

Leading pro-democracy activist Joshua Wong, the face of Hong Kong’s 2014 Umbrella Movement, was in Taiwan on Tuesday to raise awareness about events in Hong Kong. Mr Wong was charged with offences related to an alleged unlawful assembly and released on bail last Friday. He was due to meet representatives of Taiwan’s ruling Democratic Progressive party and the New Power party – the forces in Taiwan’s political spectrum that refuse to identify the country as part of China.

Ms Lam’s latest comments come after a weekend of mayhem in the city. Protesters blockaded the airport on Sunday, a day after demonstrators surrounded government offices and set fire to barricades, while police responded with water cannon and tear gas.

Beijing has intensified its rhetoric. Xinhua, the state news agency, warned on Sunday that “the end is coming for those attempting to disrupt Hong Kong and antagonise China”.

A spokesman of China’s Hong Kong Macau Affairs Office, Yang Guang, told reporters in Beijing that the “core” organisers of the protests should be held to account by the city’s courts. “There can be no holes in the legal net,” he said.