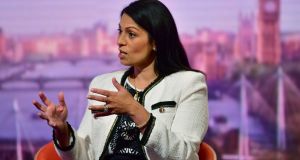 Priti Patel said the Irish border issue had moved on from the backstop in terms of discussions with the EU. Photograph: Jeff Overs/BBC/PA Wire.

Two of Boris Johnson’s senior ministers have talked up the possibility of securing a Brexit deal through some divergence on the rules in Northern Ireland, as the government’s rhetoric showed fresh signs of shifting ahead of crucial talks.

With Mr Johnson due to meet Jean-Claude Juncker, the European Commission president, on Monday, his Brexit secretary Stephen Barclay and home secretary Priti Patel accepted the Irish border was likely to be a key to any potential agreement.

Following weeks of government discussion about preparedness for a no-deal departure, both ministers said the overwhelming focus was leaving with an agreement.

“The entire machinery of government, now, is focused on getting that deal and is planning and preparing to leave on October 31st with a deal,” Ms Patel told BBC1’s Andrew Marr Show.

With Mr Johnson vehemently committed to leaving the EU on that date, but bound by law to seeking an extension if a deal is not in place by the time of the European Council summit on October 17th, there has been intense focus on ways he could find a plan acceptable to Brussels but which would not be seen by Conservative MPs as a betrayal.

Mr Johnson is set to tell Mr Juncker that he will defy the new act of parliament and refuse to discuss or accept any offer to extend the UK’s membership even if a Brexit deal cannot be agreed.

This has centred on ways to allow Northern Ireland to stay converged on some regulatory and standards border issues with the Republic of Ireland, preventing frontier checks while not having a full customs border in the Irish Sea.

Speaking to Sky’s Sophy Ridge on Sunday programme, Mr Barclay said it was important to get the consent of all political sides in Northern Ireland, but also to abide by the Belfast Agreement, which could potentially be breached by a hard Irish border.

“It is important we move forwards with the consent of both sides of the community in Northern Ireland,” said Mr Barclay, who is this week due to meet the EU’s chief negotiatior, Michel Barnier. “That’s very much part of the thinking and part of the consultations that we’re having.”

He insisted there had been definite progress in finding a successful compromise.

“There has been detailed technical talks led by David Frost, the prime minister’s Europe adviser. They have been meeting with Michel Barnier’s team,” he said. “The prime minister will be seeing President Juncker tomorrow, I’ll be meeting with Michel Barnier tomorrow, so there’s extensive talks been happening both at a technical level but also at a political level. So there has been a huge amount of work going on behind the scenes. We can see a landing zone in terms of a future deal but there is significant work still to do.”

Mr Johnson is committed to getting rid of the backstop, the guarantee central to Theresa May’s rejected deal in which the UK would effectively stay within the EU’s customs union if no other solution for the Irish border could be reached before the end of a post-exit transition period.

Another option would be a backstop just for Northern Ireland, but the government has rejected this. Mr Barclay said while it was vital for the UK to “leave as a whole”, some divergence already existed between Northern Ireland and the rest of the UK.

“We can get into those details as part of the talks. But that is different from the principle of the backstop, and the backstop needs to go,” he said.

Speaking later, Ms Patel was more cautious, saying she did not want to “pre-empt” the talks, but accepted the border issue had moved on from the backstop in terms of discussions with the EU.

“The reality is we have to deal with the backstop issue, and people said, under the Theresa May deal, that the withdrawal agreement would never be considered or looked at again, and neither would the political declaration,” she said.

“We are in different territory right now, so it’s no point arguing about the past. We are moving forward now as a government, collectively, focused on leaving but leaving with a deal.”

She added: “We have to leave and we have to leave with a deal on 31 October, and there’s no point right now trying to prejudge the discussions that are taking place.” - Guardian