Hundreds of children returned to Libya from Mediterranean in 2020 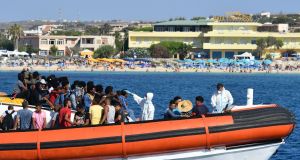 Migrants from Tunisia and Libya are examined as they arrive on board an Italian coast guard boat in the Italian Pelagie Island of Lampedusa. Photograph: Alberto Pizzoli/AFP/Getty

At least 364 children and minors have been intercepted in the Mediterranean Sea this year, trying to reach Europe, and been forced back to Libya, according to the UN migration agency, the International Organisation for Migration.

They were among more than 7,000 refugees and migrants who were returned in 2020, after trying unsuccessfully to make the journey.

Upon disembarkation in Libya, children and minors are as likely as adults to be locked up indefinitely in migrant detention centres. The centres have been repeatedly condemned by human rights groups, whose staff have documented cases of extortion, rape, abuse and neglect, while Pope Francis recently compared them to concentration camps.

The EU has been funding and equipping the Libyan coastguard to intercept boats in the Mediterranean Sea for the past three years, with the aim of stopping arrivals to Europe.

“Bringing children back into situations where torture, slavery and rape are a daily routine is unacceptable, it will scar them mentally and physically forever,” said Jelka Kretzschmar, a media campaigner and activist with the German rescue organisation Sea Watch.

“Imagine they were your kids? We really have to show and execute some solidarity and establish safe escape routes.”

Ms Kretzschmar has recently been advocating for three young people facing charges in Malta, accused of hijacking a merchant ship to avoid being taken back to Libya last year. The young men – aged 15, 16, and 19 – were rescued by the El Hiblu 1 in March 2019, along with about 100 other migrants and refugees.

Those on board protested at being returned to a country where their lives were in danger. The ship’s captain told authorities the Africans had changed the ship’s direction “by force” and the ship was no longer under his command, though the accused say he agreed to change course. When they arrived in Malta, the youths were arrested.

Their legal process has been delayed by the coronavirus pandemic. While they appeared at a preliminary court hearing on July 30th, they are still waiting to hear about further court dates.

“They struggle a lot with their situation,” Ms Kretzschmar said.

“Not being valued for who they are, not being part of a society is painful at their age and can have dire consequences for their mental wellbeing, we know one needs appreciation and acceptance, particularly when far from their families. Even worse is the waiting, not knowing or understanding why there is no progress in a procedure that [decides] their fate.”

“No one should be labelled a terrorist for trying to avoid being returned to a brutal fate in Libya,” said advocacy organisation Human Rights Watch, in a statement on Wednesday.

Three Sudanese teenagers were shot dead after they were returned to Libya in late July. They were among a group reportedly trying to escape from being brought to a detention centre, though Libyan authorities later claimed they had been trying to seize weapons.