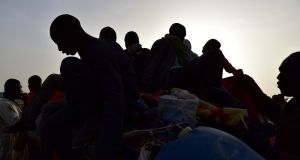 Protests are continuing in Agadez, Niger, where Sudanese refugees accuse the United Nations’ refugee agency of abandoning them in the desert after their camp burned down in January.

Refugees have also accused the UNHCR of mishandling their asylum cases. Officials of the UN agency deny the claims.

Niger is one of the countries where the EU is spending hundreds of millions of euro in an attempt to stop migration to Europe.

Hundreds of Sudanese people went to Niger from Libya in late 2017, after their attempts to cross the Mediterranean Sea to Europe failed in the face of hardening European migration policies.

After two years hoping they would be considered for resettlement to a safer country, the refugees staged a sit-in outside the UNHCR headquarters in Agadez at the end of last year. In response, they say security forces beat them, something officials in Niger deny.

Afterwards, UN officials accused the refugees of setting fire to the camp they were living in, almost completely destroying it. Sudanese refugees interviewed by The Irish Times said they didn’t know who started the fire.

In a letter addressed to the UNHCR headquarters in Geneva, dated August 1st, Sudanese refugees said they were appealing for “rescue” and described the situation as “urgent”.

“Our suffering started in our country Sudan, due to lack of security, protection, civil war, but Libya became a threat to our lives due to insecurity.”

They say many refugees have developed mental problems, because of how they are living. “These conditions are not appropriate for human beings. We need to be rescued immediately,” the letter said. “We will not stop the protest until our demands for a decent life are fulfilled.”

Alessandra Morelli, the UNHCR representative in Niger, said a small group of activists were “manipulating the rest of the population”. She said the UNHCR had found them a space where they were protected and helped them to get refugee status. “You are free to choose which version you want,” she said.

The UNHCR has repeatedly called on western states to offer more places for resettlement, saying only 4.5 percent of the global need was met last year. Ms Morelli said 60 of the most vulnerable Sudanese refugees were on standby to be moved to Italy. “Covid-19 has locked everything down,” she said.

“They just left us in the desert,” said Osman Hassan Ahmed, a 27-year-old from Darfur.

Mr Ahmed spent 14 months in Libya, three of them incarcerated in a detention centre after he tried to cross the Mediterranean Sea. “If I ask for a dignified life, is that wrong?” he said.