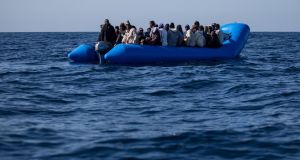 Inflatable boat with 47 migrants on board being rescued by the Dutch-flagged Sea Watch 3 off Libya’s coast in January on 2019. Photograph: Federico Scoppa/AFP

A body left floating in the Mediterranean Sea for weeks has raised further questions about the treatment of refugees and migrants who are trying to reach safety in Europe.

It was spotted on June 29th, between Malta and Libya, by crew on a charity-operated search-and-rescue airplane.

The body was wedged into the edge of a partially submerged rubber boat. It is not clear what happened to anyone else who may have been on board.

Neeske Beckmann, the Moonbird airplane’s tactical co-ordinator, told The Irish Times they had contacted authorities in Libya, Italy and Malta, as well as the United Nations, after the first sighting.

“Since then – and it has been two weeks now – nothing has happened. The only thing is that our crew had to find the body again three times, still trapped in that boat and still drifting,” she said.

“That people die crossing the Mediterranean is the result of Europe building a fortress around itself. When then the bodies are not retrieved and identified and their relatives are [not] informed about their death so they can mourn . . . this shows that the last bit of dignity that the EU had left has drowned with these people in the Mediterranean.”

The Irish Times flew a mission with the Moonbird in January this year. Since it began flying in April 2017, volunteer crews have located hundreds of boats, saving thousands of lives.

The Moonbird, and the more recently acquired Seabird, are operated by the Humanitarian Pilots Initiative in partnership with German charity Sea Watch, which also runs a rescue ship. Since 2014, more than 20,000 men, women, and children have drowned in the Mediterranean Sea trying to reach Europe, including at least 389 people this year.

Desperate people who attempt this journey are usually fleeing war, dictatorships or crushing poverty across Africa and the Middle East. Often, they have found that safe or legal routes to safety are unavailable to them, with the UN repeatedly saying less than 5 per cent of refugees and asylum seekers who need resettlement to another country are being given that option.

Last October, Fine Gael MEPs cast deciding votes to reject a European Parliament resolution which would have supported stepping up rescue operations in the Mediterranean Sea, as well as making EU support to the Libyan coastguard conditional on human rights standards being met. Since 2017, the EU has been funding the Libyan coastguard to intercept boats of refugees who try to escape and bring them back to Libya.

Over the past three years, tens of thousands of refugees and migrants have been returned and locked up in detention centres where violence, forced labour, medical neglect and food deprivation are common.

On July 13th, the Moonbird’s crew also raised awareness about an Italian coastguard patrol boat, and a merchant ship with a Bahamas flag, which failed to rescue a boat of some 60 migrants and refugees who were in distress, in violation of international law. It took two more days for the boat to get help.