From ‘caliphate’ to on the run: the demise of Islamic State

In Iraq and Syria the terrorist group has lost most of its territory and, with it, its power 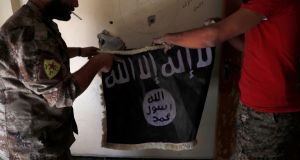 Members of Syrian Democratic Forces hold a flag of the Islamic State militants recovered at a building next to the stadium in Raqqa, Syria. Photograph: Reuters/Erik De Castro

Islamic State’s rout in the northeastern Iraqi town of Hawija last week heralded the jihadi group’s demise as an ideological, political, military and economic force in Iraq and Syria.

Today Isis is trapped in easternmost areas of Syria’s Deir al-Zor province and a wedge of territory in Iraq’s western Anbar province. Without land, the group has lost its territorial “caliphate”, subjects, fighters and sources of revenue.

Until Islamic State seized Mosul, the group’s conquests in Syria and Iraq were not taken seriously by regional and international powers. Only then did the US form a coalition to use air strikes to contain the group, which had, at the peak of its power, controlled 30 per cent of Iraq and 20 per cent of Syria. Russia joined the battle two years ago.

An offshoot of al-Qaeda, Isis invaded Syria in April 2013 and that October, captured Raqqa and declared the city its capital. Using it as a base, Isis thrust eastwards into Syria’s Deir al-Zor province, seized its oil wells and took strategic pockets of territory north of Aleppo and south of Damascus.

Its fighters moved westwards into the Sinjar mountains and massacred thousands of Yazidi Kurds, southeast to Hawija and southwest to Tikrit.

Islamic State’s dramatic succession of military victories attracted thousands. The Britain-based Syrian Observatory for Human Rights estimated it had 80-100,000 fighters while the authoritative Soufan Group said the number of foreign fighters had risen from 12,000 to 31,000 in 18 months.

Ten million people lived under its brutal cross-border regime which sold oil, taxed residents and looted antiquities to fill its coffers. Islamic State was the most powerful and richest terrorist group in the world.

Islamic State’s retreat began in early 2015 when the Iraqi government launched offensives against Ramadi, Falluja and Tikrit, retaking large swathes of territory and reducing these cities to rubble. The battle to recapture Mosul took from October 2016 until last July.

Once Mosul had fallen, Iraqi forces liberated Tal Afar in the west before shifting to Hawija. That operation lasted 15 days and led to the surrender of 1,000 demoralised fighters.

These battles coincided with the Raqqa offensive by US-backed Kurdish-dominated Syrian Democratic Forces (SDF) and the Russian and Iranian-backed Syrian army’s offensive to lift the siege of the garrison and city of Deir al-Zor and recapture the province’s oil wells.

The SDF then took northern areas in the province while the Syrian army has surrounded Mayadin, the city to which Islamic State commanders fled when Raqqa came under attack. Iraqi forces have moved to the border with Syria to prevent Islamic State fighters from seeking refuge in that country.