Audio from police scanners highlights the pandemonium during the Las vegas shootings in which at least 59 people were killed and 527 injured. An eyewitness describes his experience from the crowd. Video: Suzanne Lynch/Irish Times video 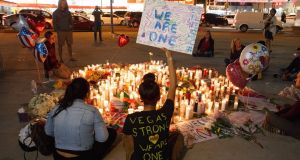 Mourners pay tribute at a makeshift memorial on the Las Vegas Strip for the victims of a mass shooting in Las Vegas, Nevada. Photograph: EPA/EUGENE GARCIA

Las Vegas remained a city in mourning yesterday as police claimed that “hundreds of lives” had been saved by the swift action of officers after a 64-year-old gunman launched a deadly attack on concertgoers on Sunday from a high-rise hotel.

Speaking at a press conference, Las Vegas sheriff Joseph Lombardo said the suspect, Stephen Paddock, had set up cameras inside and outside his suite on the 32nd floor of the Mandalay Bay hotel to monitor anyone approaching. The gunfire lasted for approximately nine minutes, he said.

He confirmed that all but three of the victims of Sunday’s gun attack had been identified, as he called on the public to continue to avoid the Mandalay Bay hotel area, which remains a crime scene.

Investigators are also in communication with Paddock’s girlfriend, Marilou Danley, who is in the Philippines, he said.

As questions emerged as to how Paddock had amassed a stockpile of over 40 weapons, including automatic rifles, senior Democrats in Washington called for a committee to be established in Congress to investigate gun violence.

But Republicans showed no signs that they would consider any legislative move to restrict gun ownership – a red-line issue for many of their voters.

In central Las Vegas, where preparations were under way for today’s visit by president Donald Trump, people were still trying to make sense of a tragedy that has left the city numbed.

Across the city, prayer services were organised at various places of worship. Impromptu vigils took place at the University of Nevada and the Nellis military airport base on the northern outskirts of the city.

But even as the citizens of Las Vegas tried to put some form of meaning on the chaos that unfolded on October 1st reality kept getting in the way.

The stories that emerged of those killed in the attacks represented a snap-shot of American life – the nurse from Tennessee who died protecting his wife as the bullets rained down; the Kindergarten teacher from California who was visiting her brother who lives in Las Vegas, and whose husband lies injured in hospital. He has been informed his wife has passed away authorities said.

The events of the last few days have shone a spotlight on the real Las Vegas – the community of two million people who live, work and have built their lives in this city and happily co-exist with the millions of tourists who visit each year.

Wicklow man Liam Dwyer who runs a restaurant in the city recalls how he knew something was wrong as he locked up his restaurant on Sunday night and headed home. “I could hear police sirens, and as I drove home on the highway I saw lines of ambulances coming the other direction.”

Like most Las Vegas residents he spent most of the night tuned to TV and social media. On Monday he cancelled the usual music session at his restaurant,  7th & Carson,  and closed up early. “It just didn’t seem appropriate. Everyone in this community is shocked. We’re just waiting to hear who else has been caught up in the shootings.”