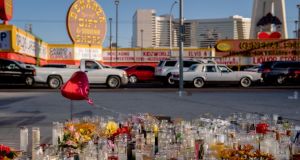 Mandalay Bay shooting: a memorial to the victims at the Route 91 Harvest festival in Las Vegas on Tuesday. Photograph: Hilary Swift/New York Times

At least one of the rifles the gunman in the Las Vegas mass shooting had in his hotel suite was outfitted with a “bump stock”, a device that would enable it to fire hundreds of rounds a minute, a law-enforcement official has said.

Authorities on Tuesday continued looking for a motive in one of the deadliest mass shootings in the United States, scouring the personal and financial history of the gunman, 64-year-old Stephen Paddock. The same law-enforcement official said Paddock wired thousands of dollars to the Philippines and the FBI was scrutinising the transaction.

Survivors had described the scene of carnage in vivid detail: thousands of people screaming and running for cover at an outdoor music festival as victims fell around them on Sunday. At least 59 people were left dead and more than 520 others were injured.

• Paddock had stationed himself in a 32nd-floor luxury suite of the Mandalay Bay Resort and Casino and fired into a crowd of thousands of people. The police found Paddock dead in his room at the hotel.

• President Trump on Tuesday called Paddock “a sick man, a demented man”, adding that “we are dealing with a very, very sick individual”.

• US federal authorities said there were no indications that Paddock had ties to any international terrorist organisation, despite a claim of responsibility by Islamic State.

• A registered nurse. A commercial fisherman. A school librarian. These are some of the victims.

Paddock had multiple semiautomatic rifles, weapons that fire a single round with each pull of the trigger. A fully automatic weapon, like a machine gun, will quickly fire round after round with a single pull of the finger, until the user releases the trigger or empties the magazine.

Fully automatic weapons, tightly regulated by US federal law since the 1930s, are much rarer than semiautomatic ones. Military versions of assault rifles often have a setting for fully automatic fire, but the versions made for the civilian market do not.

The rapid fire heard on recordings of the Las Vegas shooting suggested a fully automatic weapon, and police officers called it that on radio traffic. But replacing a standard rifle stock, the part that rests against the shoulder, with a bump stock allows a semiautomatic rifle to fire at a rate comparable to a fully automatic rifle – much faster than a human user can pull and release the trigger.

Bump stocks are legal and inexpensive, with some versions advertised for $99, or €85.

A standard stock is firmly fixed to the rifle. But a bump stock allows the body of the rifle to slide a short distance back and forth, harnessing the recoil energy of each shot. The shooter does not move the trigger finger; instead the weapon bounces, or “bumps,” rapidly between shoulder and finger.

In 2013 Senator Dianne Feinstein of California proposed outlawing bump stocks, but the US Congress has not acted on her proposal. She proposed a ban again on Tuesday.

President Trump said on Tuesday that there would be some sort of discussion about gun legislation, but he was not specific.

“We will be talking about gun laws as time goes by,” Mr Trump said as he prepared to leave Washington for hurricane-battered Puerto Rico.

On Tuesday congressional Democrats asked their Republican counterparts to establish a special committee to investigate gun violence, and called for them to retract legislation that would deregulate the sale of gun silencers. Republicans have focused on praising the response by the police and emergency medical workers.

The president, who is scheduled to visit Las Vegas on Wednesday, also praised the speed of the police response there. “What happened is, in many ways, a miracle,” he said.

Police still at work at scene

The police continued to block most traffic along the southern end of the Las Vegas Strip on Tuesday as they combed over the concert venue, which was littered with lawn chairs, backpacks and other personal belongings fans left behind as they fled.

The venue was effectively frozen in time, with the stage still intact just the way it had been when the shooting began, and signs beckoning “Come on in!” at the entrance. A handful of flowers and red heart balloons had been placed on the median.

Although many witnesses gathered in the intersection of Reno Avenue and Las Vegas Boulevard on Monday, by Tuesday they had been replaced with dozens of television cameras from all over the world.

Recordings of police communications, captured by Broadcastify.com and some individuals, offer a moment-to-moment account of how officers responded to the first reports of gunfire. The police eventually pinpointed a suite in the Mandalay Bay hotel as the source of the shots, and they gathered in the stairwell just outside the gunman’s door.

At least 23 firearms, including a handgun, were found in Paddock’s hotel suite, according to the Las Vegas Metropolitan Police Department. Sheriff Joseph Lombardo of the department said Paddock used multiple rifles during the attack.

A federal law-enforcement official earlier said two rifles were outfitted with scopes and set up on tripods in front of two big windows. Another official said that among the weapons were AR-15-style assault rifles. Both officials spoke on the condition of anonymity because they were not authorised to divulge details of the investigation.

Sheriff Lombardo said that Paddock brought at least 10 suitcases into his hotel room over a period of time.

The sheriff said that Paddock fired through his hotel-room door at security guards, striking one in the leg. The guard is still alive, he said. Swat officers went in after the guard was shot.

In addition to the weapons at the hotel, the sheriff said the police retrieved 19 firearms, as well as explosives, several thousand rounds of ammunition and “electronic devices” from Paddock’s home in Mesquite, Nevada.

Stephen Paddock was described as a high-flying gambler who lived in a quiet retirement community and played golf. Officials said he had no significant criminal history and drew little attention to himself.

Investigators are trying to piece together his financial history to search for clues that could help determine what set him off.

Details about Paddock’s career and livelihood were sparse, aside from observations by neighbours and family members that he routinely gambled large amounts of money. “He was a wealthy guy, playing video poker, who went cruising all the time and lived in a hotel room,” a brother, Eric Paddock, said.

Stephen Paddock and his three brothers were raised by their mother, who told the children their father had died when in fact he was in prison, Eric Paddock said. Paddock’s father was convicted in 1961 of committing a series of bank robberies and was sentenced to 20 years in prison. He escaped from La Tuna federal prison in Texas in 1968 and became a used-car dealer and bingo parlour operator in Oregon.

In an interview with CBS, Eric Paddock said that his brother Stephen was “not an avid gun guy at all”. “The fact that he had those kind of weapons is just – where the hell did he get automatic weapons?” he asked.

‘I’ve never been so scared’

The police estimated that when the shooting began, 22,000 people were at the Route 91 Harvest festival, listening to Jason Aldean, the final act of the three-day event.

Video of the shooting captured nine seconds of continuous, rapid fire, followed by 37 seconds of silence from the weapon and panicked screaming from the crowd. Gunfire then erupted again and again in extended bursts. Some concertgoers thought the noise was fireworks, but as it became clear what was happening, people fled, many of them unsure where the shots were coming from, or where they should go.

“Everyone was running. You could see people getting shot,” said Gail Davis, one of the witnesses. “I’ve never been that scared in my life,” she added. “To have this happen, I can’t wrap my mind around it.”

Video from the shooting showed Aldean running off the stage as the gunfire erupted.

Within minutes a police officer on the scene radioed to report cases of gunshot wounds “to the chest, legs, terminal arteries at the medical tent”.

Patients surged into Sunrise Hospital and Medical Center, within walking distance of the concert, where at least 124 “met the criteria for trauma activation”, said Dr Jeff Murawsky, the hospital’s chief medical officer. They included patients with single and multiple gunshot wounds to the head, face, chest, body, arms and, in one case, a finger.