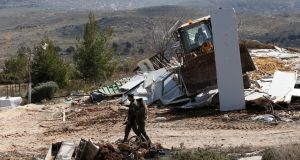 The European Union has cancelled a top-level summit with Israel in response to a new law retroactively legalising some 4,000 settler homes built on privately-owned Palestinian land.

Right-wing politicians threatened to press for annexation of parts of the West Bank if the Israeli high court overturned the move.

EU foreign policy chief Federica Mogherini and Israeli minister Tzachi Hanegbi were to have attended the February 28th Brussels summit, aimed at defining EU-Israel relations in the coming years. However, the EU postponed the meeting indefinitely in response to the settlement law and a recent Israeli decision to build 5,500 new West Bank homes for settlers.

The controversial “regulation law”, as it is called, was passed by a vote of 60-52 in the Knesset on Monday night. It was denounced as a land grab by the Palestinians, who urged the International Criminal Court in The Hague to intervene.

“Land theft and occupation has reached the level of war crimes,” said senior Palestinian Authority official Saeb Erekat. “Why are you waiting? There must be an investigation now. The Hague is the only place where justice can be demanded.”

A number of Israeli NGOs and the anti-settlement watchdog Peace Now announced that they would petition the high court against the law. Most commentators believe the courts will strike down the measure.

Attorney general Avichai Mandelblit told prime minister Binyamin Netanyahu before the vote that he was not prepared to defend it in court. “The Bill allows the expropriation of private property contrary to Israeli law, and in a manner that is inconsistent with Israel’s obligations under international law,” he warned.

Right wingers in Israel view the judiciary as a bastion of left-wing liberalism determined to thwart the settlement enterprise and have vowed to press for the annexation of West Bank settlement blocs if the courts rule the regulation law unconstitutional.

“The Israeli Knesset said what it wanted. It did not ask the high court of justice to decide. It decided on its own. This is a decision of the Jewish people,” said Jewish Home Knesset member Motti Yogev. “If the high court of justice dictatorship goes against democracy and employs judicial activism, this will force the democracy to tell the court: restrain yourself.”

Two recent developments were critical to the timing of the passing of the regulation law: last week’s forced eviction of 40 settler families from the illegal outpost of Amona, which angered the government’s right-wing base, and the election as US president of Donald Trump, who has taken a much softer position on settlements than his predecessor Barack Obama.

The Trump administration said it would withhold comment on the legislation until the Israeli courts ruled on its legality.

Next week, Mr Trump hosts Mr Netanyahu at the White House in a meeting seen as crucial to determining how much leeway the new administration will be willing to grant Israel as pressure mounts from the right to seize the window of opportunity and cement Israel’s control over the West Bank.